September has been a wonderful month - warm, bright - nothing like the cold/chilly, dark, wet Septembers I remember from growing up. It's like summer decided to come two months later! We've been out and about, outside in the sun, gathering from our tiny garden project (four pieces of corn and a ton of tomatoes - yellow and red).

Last weekend Hubby suggested that we drove out to Tomter, a nearby farm which had a self-picking service of vegetables. P was grumpily stuffed into the car (anything that does not include Pokemon cards or playing with friends is torture these days, it seems...), while A came along surpricingly quiet (tired, I suppose).

Upon arriving at the farm, we piced up some plastic bags and ventured into the fields. We picked sweet corn (and some not so sweet corn). I don't remember the names of the types of corn that we picked, but the ones we've tasted were YUMMY!

A decided that she wanted to walk - and so she spent some time climbing through the fields before she decided that the roads were easier to walk (run) on.

Hubby and P picked sweet corn, and P ended up being quite the expert at cleaning the corn cobs.

Afterwards we stopped by the farm shop and picked out some apples for the kids, lettuce, cucumber and pumpkins (both an orange pumpkin and a couple of butternut pumpkins).

For dinner, we barbecued some hotdogs and corn cobs. Both the kids really liked it - and me too! (I haven't been very found of corn before, but this was really tasty!) And P lost another tooth! He's lost four now, and have a couple of more ones that are slightly loose.

We ended up taking a re-run of the dinner a couple of days later - and the rest of the corn was stored in the freezer. I've made pumpkin puré out of the orange pumpkin, and I'm thinking about either baking the butternut pumpkins, or making a soup of them. I've seen (somewhere - online?) that someone baked the pumpkins, with chevré or brié and drizzling honey over them, which looks very nice.

I think 2016 might have been the year of the major knitting projects. Looking back, I've knitted three cardigans this year - two for me and one for a co-worker.

Finished two weeks ago, the Nancy-cardigan looks gorgeous in the soft browns of the alpaca-yarn used.

I took some detail photos before handing it over - and am waiting for a good opertunity to take a picture (or twenty) of the cardigan with it's owner. 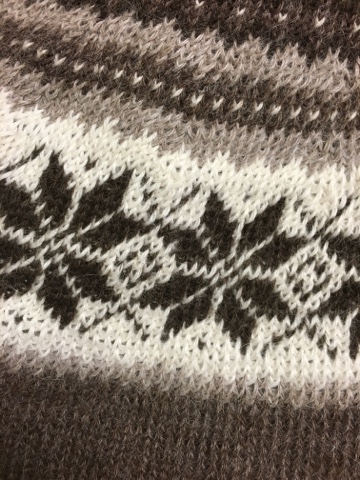 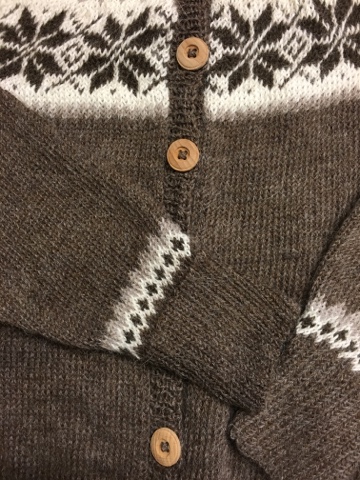 She chose these simple, yet very cute, wooden buttons. 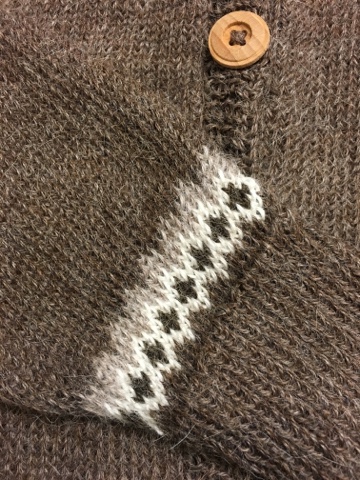 The design is pretty simple, but effective! 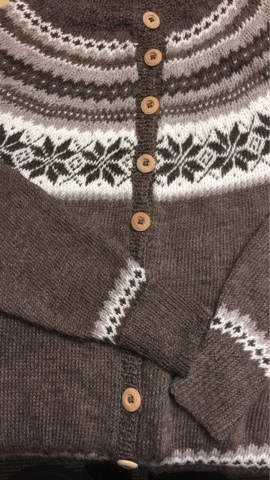 All in all a fun pattern to knit - and nice yarn to knit with. I'm considering knitting one for myself too, in the not so distant future (but right now, I'm feeling a little done with knitting big cardigan-projects..). 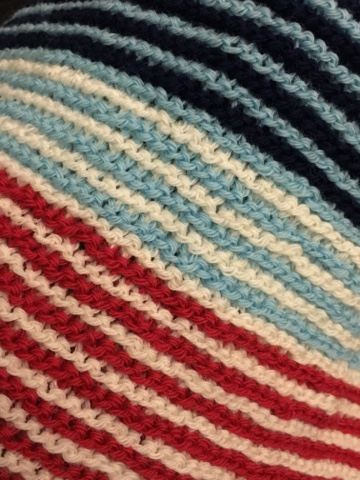 A quick trip to Trondheim

I had to take a short trip to Trondheim last Tuesday, workrelated - to make a quick summary. In order to get to the airport in time for my 7AM flight, I had to get up insanely early - 4AM the alarm rang and by 04:35 I was out the door, heading for the bus stop. The airport express bus will seize it's route through Oppegård, where I live, by October 1st, so what I'll do the next time, I don't know..

Anyway.. It was dark, quiet and almost noone else out walking at 4:30 in the morning..

The bus finally came, and about 50 minutes later it arrived at the airport. The sun had begun to rise, and at the airport there was a mix of earlybirds - awake and ready for a day of travel - and sleeping people (I past quite a few of them on my way to my gate, sleeping and resting in chairs close to the gates, perhaps waiting for delayed or early flights). The security checks went swift, and I had some time left until my flight was due to leave. Not a lot, but enough to pick up a soda and a chocolate bar at the kiosk on my way to the gate.

I think I fell asleep shortly after the safety procedures onboard, and can't really say that I remember the plane taking off.. I woke up a few minutes before the captain informed about reaching our destination - which is quite a nice way of travelling in the morning.

I met three of my colleagues on the airport in Værnes, and we took a taxi to the local office. Finally getting a cup of coffee when we arrived at our destination, and the workday could begin.

After a whole day of discussion, planning, status and information, a couple of us went back in to town, while others went back to the airport to catch earlier flights home. I'd decided to catch a flight a little later, and so I got to spend a couple of hours walking around in this great city where I've spent so many summers.

I took a walk up to Nidarosdomen and walked around outside there for a little while, remembering when my grandfather took me there once when I was little.

I bought a couple of presents for the kids at Trondheim Torg (a shopping mall). I'm not away that often, or for very long, but it's always nice to get presents.

My flight back to Oslo was around 7:30PM, so I had a couple of hours until I had to get back to the airport. I had a quick bite to eat at Værnes before I found my gate, and lounged in a very comfy chair until it was time to board the plane.

I found the perfect spot. Right outside the window was the gate my flight would leave from, so I sat there watching the flight before mine get ready and leave - and I watched when my plane came in, "unloaded" it's passengers and got ready to leave.

On the flight back I managed not to fall asleep, but got a little bit of knitting done, finished my audiobook and started listening to an episode of a podcast.

17 hours after leaving home I was back, and - after a quick meal - ready for bed. I don't really mind travelling, but I'm glad I don't have 17 hour-days that very often..

Last week Aurora had her 18 month check-up at the health clinic. After I dropped her off at the kindergarden, I decided to go home and have a sewing day. (I can't remember the last time I did that, and I had so many plans!)

Well, I started around 9:30-10 and didn't take a break until 12:30 (which was when I started to make some serious mistakes.. a break was long overdue!) and had lunch.

After lunch, I ripped out the stitches I had made wrong, made some corrections and continued to sew until it was time to pick up the kids.

I had a blast! I don't think I've had the opertunity to spend so many hours by my sewing machine since.. I don't know when. And I am very pleased with the results!

I finished a table runner I'd started almost exactly one year ago, quilted it and got the binding on. Now to wait for Christmas..

I made two Simple Zipper Bags, as shown in the tutorial from Fat Quarter Shop. Finally finding a good (and fun!) use for some of my (maaaaaany..........) mini charm packs.

And I finished my secret test sewing project from my last post. It was really fun and easy to make - and I can see about a dozen or more ways to modify this bag. I am definetly making more! Adding pockets in the lining, maybe a cute button for closing/securing the contet, a matching zipper pouch or accessories... hmmm... The fabric for the bag is a piece of microfiber that I found during a visit to Stoff og Stil in their (fairly) new shop in downtown Oslo. It was a leftover and priced down, but I really liked the colours and the print, and had just this pattern in mind when I bought it.

***
I actually finished a couple of more things the day after, but I need to take some pictures first... Not bad, for a sudden dewing frenzy! (My inner crafter is impatiently awaiting the next opertunity to sew..)
2 comments: