Yea, I know! It's quite shocking, but I have been getting some sewing done this summer (and these are just a couple of the finished items).
Anyway, I had these four blocks from a Cinderberry Stitches Christmas pattern, but I wasn't sure if ﻿I wanted (needed, had room for..) another wall hanging, so I decided to try to make a pillow case. It worked out quite well, if I should say so my self. ^.^ 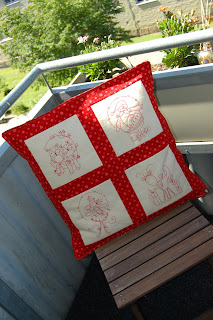 I haven't decided if this is a keeper or a gift item yet, if I end up keeping it, I might have to make another one (same size, atleast)﻿ since we have two of these huge pillows on our couch.. 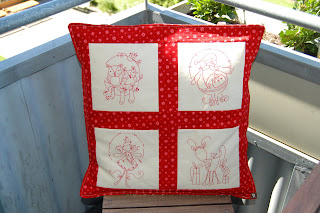 I really love the way it turned out, though. The stitcheries are adorable, and I think the rhaspberry coloured thread goes well with the colour of the fabric around (which was part of the prize I won from Jordbærstedet once, a few years ago). Nice to make something from stash, and nice to cross something off the (seemingly) endless list of things to do/finish.
A few years ago, my BF designed and printed a couple of pieces of fabric from Spoonflower, but it ended up on a shelf (in our living room, actually) until this summer.  ﻿ 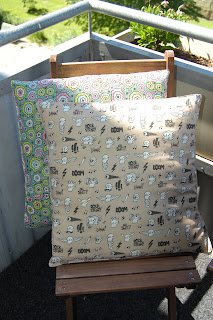 Now the two previously mentioned pillows are dressed in our own-designed, own-made pillow cases﻿ - and they fit right in with the rest of the (well, somewhat) wonky items in our living room (let's see, there's the Dalek-tin, my TARDIS piggy bank, a couple of Willow Tree-figurines, a viking head candle holder, and too many other things..). 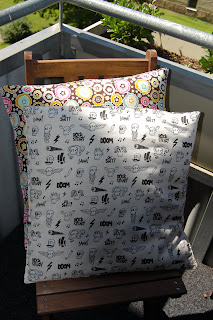 Funny thing, when Plutt sees the pillow cases, he points to them and says "Moo!". Not quite sure where the cow comes in, seeing as there are skulls on them.. Atleast he's learned to say "Bomme!" when he sees the back side (as in blomst/flower).
I'll be back a bit later to post some pictures of finished things (both sewing and knitting). Hopefully, it won't take as much time as posting these ones. o.O
2 comments:

There are days when words just aren't able to say what you'd want them to say. Today has been a memorial day here in Norway. A day of thought, a day of memories - a day of candles burning in rememberance.
***
In lack of words, I chose to share one of my all-time favorite songs (actually two) - Somewhere (Over the Rainbow) / What a Wonderful World.
***
Light a candle. Hug a loved one.
1 comment:

Knitting on the veranda, with a candle burning in the summer night. Very very cozy indeed. 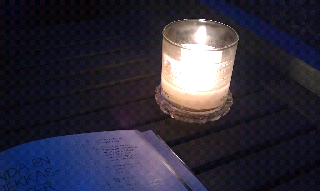