When the child is..

In a birthday party at a playland, what does the mother do? 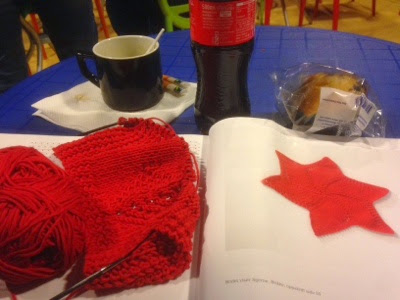 Had to go for a quick walk.. Couldn't just sit inside and look at this sky.. 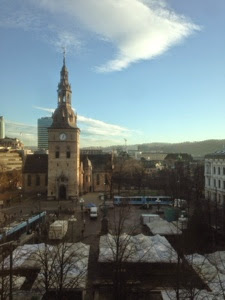 After seemlingly endless gray, the sun and the sky finally showed up yesterday afternoon, giving us a sunset unlike anything anyone in this town has seen for at least a month! 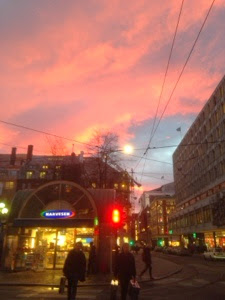 And this morning the crispiness of the night cold had given the world a touch of glittery frost. 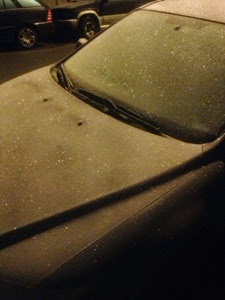 Today is a dreaded day to stay in the office. I mean, with this view of the sky, who would want to stay inside? 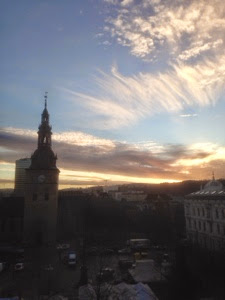 Enjoy your Tuesday! Go outside, if you can - and catch some fresh air.
1 comment:

I almost wrote the title of this blogpost in capital letters.. because that's what my head feels like. STUFFED. Not with ideas or inspiration.. no, I wish.. it's plainly stuffed with yucky stuff perfectly preventing any type of normal breathing or taste of anything.

Yep, we're at it again.. this is my third cold this season. (And it sucks..) According to my doctor (had to go there today to get some eyedrops for Peder, who woke up with an eye infection this morning) it's just comes with my condition. Apparently, my body's too busy doing other things than making sure the immune system works properly. Which sucks.. In a way. I don't like runny noses or being unable to breathe normally (I'm a nose-breather, I like breathing through my nose - I can't sleep breathing through my mouth. (And I'm very sorry for this totally TMI - too much information!)

Right now I could've been sewing or cutting a new project, I could be knitting on the mystery knitting project - but I'm stuck barely paying attention to VH1 and their playlist of The Ultimate Movie Soundtrack, hoping things will get easier by Saturday. On Saturday my mom and I will be going to Juleexpo (a huge Christmas market, with several booths filled with knitting, sewing and other hobby stuff). We missed it last year, due to the 50th anniversary of Doctor Who in London, but this year we're going! No matter what. (I hope..)

And now, if you'll all excuse me, I'm going to blow my nose for the eleventh-hundred time today, and continue to do nothing (except perhaps feel a little sorry for myself).

Time seems to have been running too fast for me again. Here I am, thinking it's just been a wee bit of time since my last post - and suddenly we're in the second half of November!

My last post may have been on October 31th, which isn't too long ago, but when the thought running through your head says that your last post was a couple of days ago - then it just doesn't add up.. I feel like a lot of things don't quite add up these days. I mean, this morning a colleague and I went out for coffee (good coffee, not crappy, makes you feel sick, office coffee machine stuff) and the coffee shop had a sign reading 37 days till Christmas (we celebrate on Christmas Eve here in Norway, not on the 25th as so many other countries do). Well, where did that time go?

With Christmas decorations popping up everywhere, especially in the streets and the stores, the urge to prepare lists and start shopping/making hits me like a brick wall. I have some ideas that I think will work out - but there are always those special people in your life which are really hard to figure out stuff for. I mean, how hard can it be to get a really good idea? Very!

But I am looking forward to snow. I like snow. I miss snow. Do I like the late fall/early winter season here in Oslo? Nope. Why? Because it rains.. It's been raining for like a month now. Most of the trees have lost their leaves, which are on the ground, rotting to a mushy brown mudlike yuck (sorry for creating pictures..). A few weeks ago we had some snow falling during a Friday afternoon (but, since it was too moist, it barely stayed on the ground for more than an hour). I think I spent most of that afternoon listening to Frank Sinatra and Bing Crosby singing Christmas carols. Which was nice - nice voiced and nice background music for work (I like listening to music while I work).


I'm looking forward to decorating our home for Christmas too. Since we're going away for most of the holidays, we're thinking of decorating a few days early. (Us being Norwegian, we have a tradition of not putting up any or just a very few decorations until December 23rd.) It is, however, nice to be able to enjoy the decorations and the lights for a few days before leaving.

Today I'm off to the post office with Peder. I told him I had to go there to send a parcel today, and he really wanted to come. Which is fine by me, it means that I won't have to stress to get to the post office right after work and be worried about getting stuck in a line and being late picking him up from kindergarden. Instead I'll go pick him up first and then we'll both go. I wrapped the parcels yesterday, and barely managed to squeeze them into the bubbly envelope I'm sending. I sure hope the receiver will like them, otherwise she's free to return them (I wouldn't mind keeping them for myself)! Just joking, I think she'll love them!