An apple cozy can also double as a glass cozy with built-in coaster?

May Britt published a post on her blog yesterday, related to us quilters/crafters and our need (?) to make bags (or similar systems for keeping and storing things) - and gave the challenge to show some of the bags (etc) that other quilters/crafters have made. Well, after a quick phone call from my mom, I started rounding up some of the stuff I've got hidden in nooks and corners (some are often in use, others not so often), and I ended up with a nice pile of things (note, not all of these are bags, but they can and are used to store things in).
(Blogger and I had a bit of a discussing with regards to keeping my photos turned the right way. I lost..)
My Sue Daley-basket/box is often in use, and it lives next to Aurora (my sewing machine) - holding pen, glue, oil for my sewing machine, and other useful items. The green one is my needlekeeper, made from a pattern from Cinderberry Stitches. The purple one is a bag (with zipper!) that I made a few years ago, and I use it to keep tighteners and ends for my exchangeable knitting needles in it. The roll on the right/bottom keeps my straight knitting needles nicely sorted, and the other small items are various bags, needle books and keepers that I've made, either with my mom or while attending a class in Göteborg a couple of years ago. 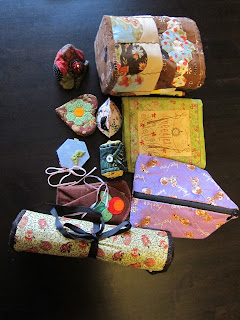 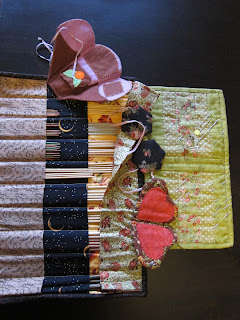 The second picture shows some of the items opened up. I especially love my needlekeeper and the keeper for my knitting needles. They're in use almost daily!

I also found some pictures from esrlier posts, like the coin purses my mom and I made a few years ago, the drawstring bags I made - I think - a long time ago, the handy bag for sll you necessary sewing gear from Quilt My Design (a danish quilt shop who was present in Göteburg 3 years ago, for the Nordic Quilt Meeting - and, finally, the bag I made a couple of months ago (in daily use, I keep my current knitting-wisps in it). 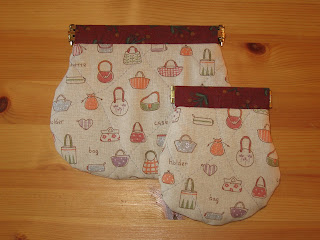 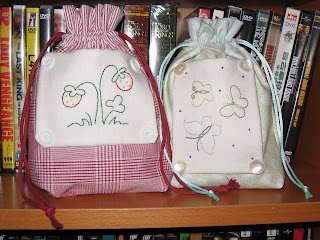 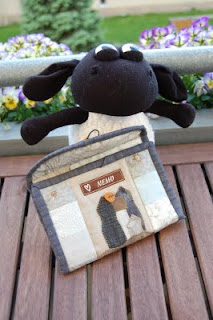 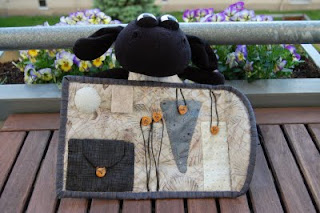 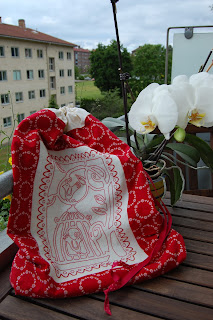 And there you have it, some of the bags and such that I've made, some which are in daily use and others that were alot of fun to make, but might've been stored in a drawer for some time now.

The Nerd Wars Tournament 5 is nearing the end of round 1 (28h of June) so there's still time to hand in a few more projects (but I think this one might be my last project for this round).

For the challenge (Intellectual) A Most Excellent Adventure Through History, I chose to learn a new technique, and found inspiration from both my newly acquired skills in crochet (..haha..) and from the ideas I got from reading about pjoning (which is an old technique for knitting/crochet). Pjoning is also known as bosnian crochet, shepherd's knitting, dutch knitting or påtning (in Swedish).
﻿

For my second finished object for Nerd Wars, I chose the following Google Doodle for inspiration :

My mom taught me how to crochet an apple cozy, and I thought that would fit perfectly for this challenge.


More information can be found on my Ravelry-page.

***
The Nerd Wars-tournament is divided into three rounds, each with 6 challenges. Read more about it on Ravelry.

Tardis-hat - Bigger on the Inside

I decided to join Nerd Wars Tournament 5 (run through Ravelry) this summer, to see if that might help me get some inspiration in regards to crafting.

My first finished object is a TARDIS-hat inspired by the character Amy Pond (Doctor Who, new series, season 5) and her childhood encounter with The Doctor.

More information can be found on my Ravelry-page.﻿

***
The Nerd Wars-tournament is divided into three rounds, each with 6 challenges. Read more about it on Ravelry.
No comments:


Yes, since when seems to be the right questions. A quick glance at the list of posts shows that my last post was dated early May. And now? Now it's June 10th and a lot of things have happened in those weeks.

Just to have somewhere to start, I think I've managed to get my mojo (or inspiration to craft, if you want to call it something else) back. Not quite sure when it happened, but it might have returned during the two weeks in the middle of May when I was on leave (removed my tonsils, finally! *cheers*) and suddenly found myself in possession of,  not only time and energy, but also the want to create something. Which means that the pile of working-ons and the pile of finished stuff has actually grown, and I finally feel, well to quote one of my favorite characters (Skeleton Jack, from A Nightmare Before Christmas) just like my old bony self again. Well, perhaps not bony, but I think you know what I mean. :-)

Anyways, I thought I'd show you a peak of what's been beating it's wings and shaking it's tailfeathers around our living room lately. Don't worry, you'll see more when it's all done. But for now, just a peak.


But let's get back to the stuff that I will show you - stuff that are all completed (down to the last stuffing and stitches.

First couple out are these two darlings. The pattern is originally a Melly & Me-pattern, from their line Sew Little and is called Stuffie Play. I had completed the stitchery on the giraffe some time last fall, and made the bunny in a whiff - they're both backed with some vintage fabric I had in my drawers (the giraffe in a soft blue, and the bunny in a light green vintage copy). Very cute - and very fun to make!


When the cute critters were completed, I decided to try and finish one of the small kits which seem to just collect dust on the shelves. I picked the kit to make some scented Christmas ornaments which I received on the last meeting in Tåsen Quiltelag just before Christmas. They were quite simple to sew - only, I haven't had much experience in sewing the lace border on.. well, I don't think it's bad for a first-timer. They're stuffed with batting wrapped around anïs and cinnamon sticks, and smell absolutely divine!


This last one has actually been completed for a while. Originally, the pattern called for the stitchery to be stretched around a canvas and hung on the wall, but after trying 5 times (or more, I lost count..) and not getting it centered, I gave up. Yup! I gave up - and made it into a bag to keep my wips in. Very handy when it comes to keeping a knitting project organized (I've tried). The stitchery is from Rosalie Quinland, and is called Free as a Bird.


We've just come home from our first real trip with Plutt - spending most of the previous week in Copenhagen, Denmark. Things have worked out surprisingly smooth, considering all the new things for all of us (traveling with children, spending two nights on a big boat, hotels, lots and lots of walking, etc) and perhaps one of the biggest changes since coming home (well, we came home yesterday, so it's basically a test project at the moment) has been Plutt's move from a crib to a cot (not quite sure what to call it, but we've removed one of the sides of his crib so that he can climb in and out by himself). It worked so well when we were in Copenhagen and Plutt slept in a big bed all by himself, so we decided to see if it would work at home as well. Last night worked liked a charm. *fingers crossed for tonight*

Well, I have a couple of surprises hidden up my sleeve, but I'm going to keep them for a little while longer. So this is it for now.