Our bags are packed!

Tomorrow we're off - and won't be back for close to three weeks. :)

We're off to the States, two weeks in California/Los Angeles/San Fransisco/Las Vegas and there abouts, and a week in Minnesota/Bemidji/Black Duck/Tenstrike. We'll be flying over Iceland, with a short stop in Reykjavik. Of course, quilt shops are on my list of things I want to do, but there will be more - oh yes, lots more.. The batteries for the cameras are charged, and notebooks prepared.

See you all when we return! And have a nice summer/vacation/sewing time!
3 comments:

Each year, on the Sunday closest to the 4th of July, the ACCN (..I think..) arranges a gathering for all Norwegian-Americans in Frognerparken in Oslo. Last year I went with my BF's family, but since half of them already are in the States, and the other half is working hard and preparing for vacation, I went up there with my sister. The weather looked very unstable, but it was HOT! and actually very nice. 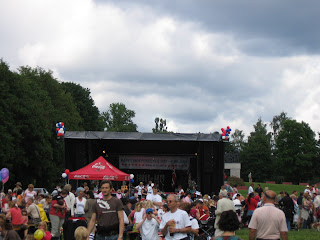 After a couple of hours, my sister had been introduced to both Sloppy Joe's and Rice Crispy Squares - and we decided to go home. But it was fun! :)
I found a pattern in one of my books - Lapper til hygge og nytte, by Grete Gulliksen Moe - for a triangle bag, and I knew I had to try it. 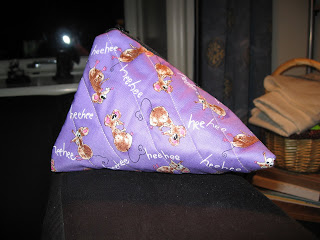 It was really simple and fun - and I cheated a little.. oops.. but for a first try, I think it came out well. :)

Also, I've made a small stitchery picture (stitchery-in-a-wooden-frame) from a pattern by Tilda. A bit too "pink" for my taste, but kinda cute too. :) Right now it hangs on a small space between out hall and the livingroom, waiting to know it's destiny - a keeper or a gift... hmm.. 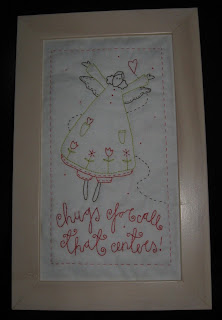 I prepared the Bareroots stitchery Folk Art Patches (the small stitchery, not the big quilt or the pillow) tonight - I needed something to do because I don't feel tired and don't want to sleep yet - but when I had cut the background, drawn the pattern and made the border, I found that the scraps of batting that I had left, would be like a jigsaw puzzle if I wanted to use what I had now.. so right now the stitchery is laying on the table, waiting for my parents to pick me up tomorrow and stop by Lille Stasjon (the store where my mother works) so that I can pick up some more batting. Annoying, but I won't be able to do any more work until I have more batting.. *argh*

I got a really nice mail from Anja from Germany the other day - my pincushion partner. I can't wait to see what she's made from the challenge, and I really hope she'll like what I made. :)
2 comments: