All quiet on the crafts front

Yes, that's basically what's going on in my life these days - not much on the crafts front, but more or less all on the work front. It's a trend these past few months that's not exactly positive, but that's what you get for changing the basic system for the whole company and then have to balance everything between old projects using old systems, new projects using the new system - and also comforting about 50 engineers who panic at the idea of doing something themselves. Apparently, you're only allowed to save up a certain amount of overtime hours a year - during the past couple of months I've saved up about half of that already. Thankfully, we're having Friday off.. 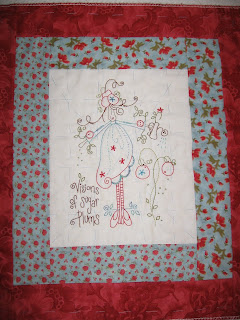 On the more fun part of life (haha) the Truly Scrumptious is going great! Block number 5, 6 and 7 are completed - and number 8 started. It's kinda strange to think that soon I have to start looking for fabric for borders.. I'm thinking about a nice brown one, in the same series as the stripes, but have to see if the LQS has it or not.. 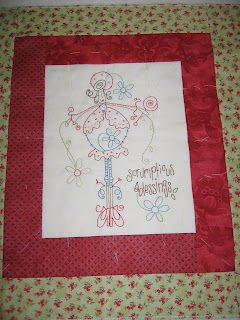 After this - TS I mean - I'm thinking about starting the Butterfly Garden, but before I do that, I need to do some planning regarding colors and such. 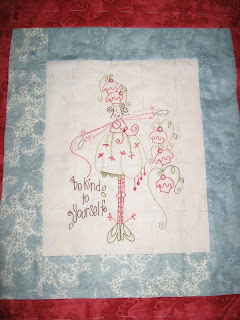 But! I've still got some time before I have to decide on that. I mean, I'd like to get all 9 blocks completed first, sewn together, and atleast ready for quilting before I start another big project. Then again, I might change my mind.. 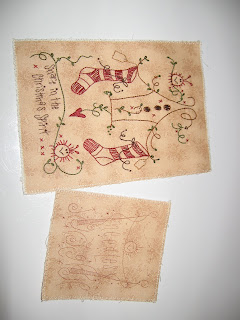 When it comes to Cinderberry Stitches, I've completely fallen for most of the patterns - and I can't seem to not start new ones.. Above - the picture got turned, for some odd reason - are two projects, one almost completed and one just started. I realized I didn't have a needlebook, and since I had the pattern - why not? And the Christmas-thing was started in December last year. Not much left now, so should be able to finish it in good time for next Christmas. 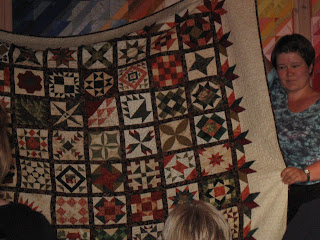 Anne Ida brought her Sylvia's Bridal Sample too show and tell in the last guild meeting before the summer (Hanne brought her Nearly Insane too, but my camera decided to die on me before I managed to take any pictures), and it's absolutely gorgeous! If you ever have the chance to take a closer look at this masterpiece, you'd better take it. ;)
3 comments:

There's a new toy in our apartment!


I've been toying with the idea of buying a tiny tiny laptop for quite some time now - I guess ever since I first saw a itty bitty 12.1" some 6 years ago or something like it. And last Friday I could finally pick up my new little toy from the post office. :) 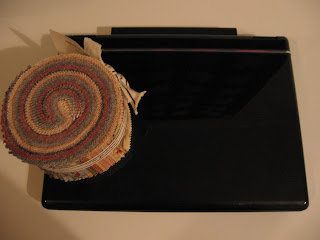 I tried to find something most people out there in the blogiverse could relate to, in comparison to size I mean, and I think that most of you know approximetly the size of a jelly roll. :) This is how it looks like when it's closed - shiny and glossy, the finish is the same kind of finish as on a piano (black, with tiny tiny pieces of silvery glitter) - about the size of two jelly rolls. 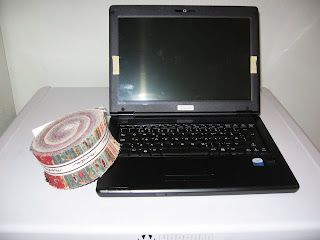 Open, it looks a little different (the screen looks strange, most because I still haven't removed the protective sheet yet). Gor-ge-ous! I just have to pat it a little every time I pass by it. :) 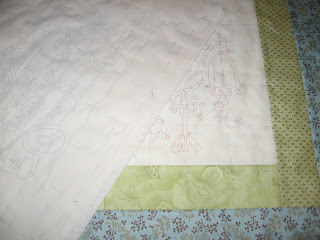 These are the latest projects ready to be started - the 6th and final stitchery from Jordbærstedet and block no. 8 of the Truly Scrumptious. Yep, on a roll there - going through one block in about a week and a half or something like it. What can I say? I'm hooked.. 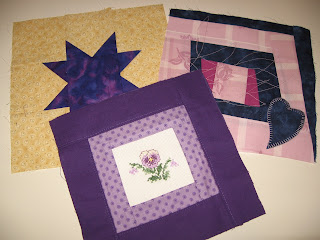 These are the latest three swap blocks I've received - now I have 7, but I should've had 8.. Strange.. I hope to receive the last one soon (but I'm not really in a rush, yet, I have no idea how to put the blocks together, or how to make my own..).

Well, I'm off to bed. Got alot of things going on at work these days - spending quite alot of time extra there, overtime, stress, messy things, and whatnots. I hope things calm down soon..

Until next time - take care and have an ice cream. ;)
2 comments: