Once upon a time Anni Downs came to Oslo to hold a course. This was around the same time as her line of small projects called "Little Stitches" (I think..? correct me if I'm wrong) came out in the stores. I think I ended up buying four or five of those little projects (preprinted linen was included) and then I spent some time stitching the designs. Well, fast forward three years, and the stitcheries were rediscovered in a small box. Most of them done, except from one of them, where a couple of details were yet to be stitched.

And a few hours later the first of these projects saw the finishline.

I give you.. Cake Money Purse.

I had an idea as to why I wanted to finish this one - not just finishing it, but giving it a purpose. Well, later this year, I will be going on a trip. Until the day of departure, this little purse will hold the funds for my travel. Quite suitable, isn't it? Although I'm not sure if all the funds will be spent on cake.. some may go for coffee, and some? Well, we'll just have to wait and see, won't we.


***
I've just finished knitting my Marius jacket, and got another project handed to me (more or less) by one of my colleagues. I'm knitting her a jacket - quite gorgeous too - and without a deadline, so everything is (so far) just fun. :-)
1 comment:

A couple of finishes!

These pictures were saved as a draft post for a few weeks, sorry about that..
The first is a tablerunner. A couple of years ago Anni Downs came to Oslo and held a few day courses. My mom and I went on a Thursday, and the project for that day was the tablerunner with small houses and trees. 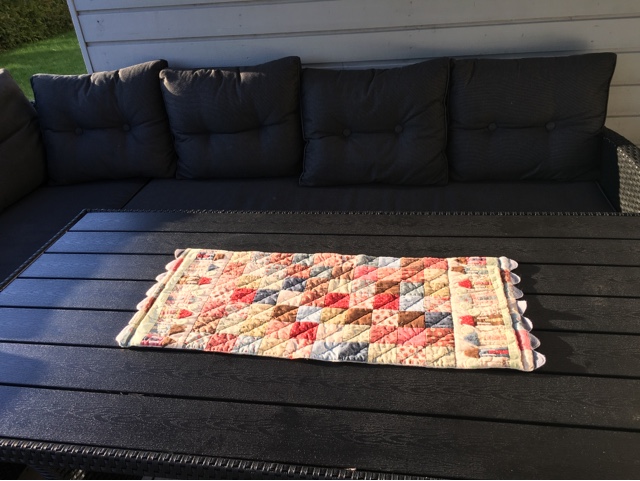 I ended up making it a few rows shorter, to better fit our tables. 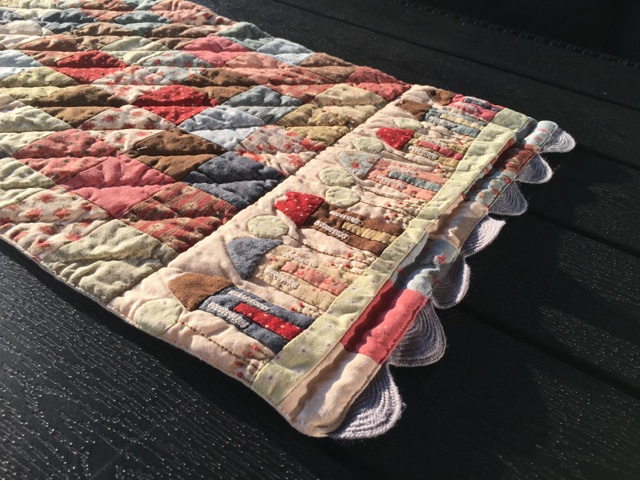 Lovely colours and a fun project (I just ended up, unfortunetly, keeping it as a UFO for a couple of years before finishing it..) I handquilted stripes diagonally through all the squares. (It has been re-ironed, and looks much better now.. ;-))
The second finished project came from last years Advent Calendar my mom gave me. The stitchery was completed quickly, and thanks to my mom for including already cut and prepared fabric, the piecing went smooth and quick. 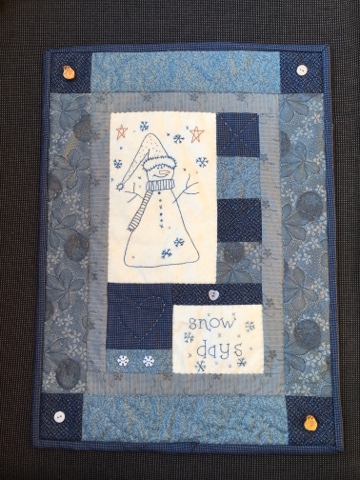 I handquilted this one too, and added buttons and beads for decoration. Now it awaits the colder season, so it can decorate our hallway. :-)
No comments:

When you really want to get some sewing done, but you end up replacing a button in hubby's shorts. 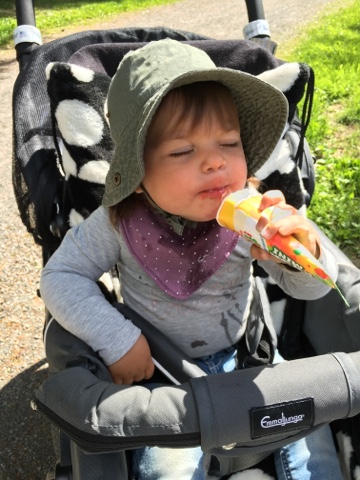 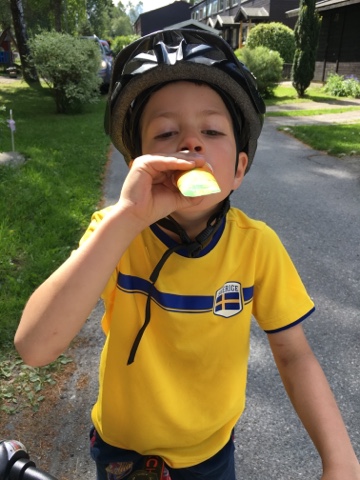 Enjoy the sunshine, warmth, summer - or the chilly, cozyness - whatever suits you where you are.
2 comments:

Status from our garden

These pictures are a couple of weeks old by now, the status is overflowing with green - but they do show off Hubby's boxes quite nicely.

In these three we have salad (tasty, we've been having it for dinner for over a week, not that it shows), cabbage (knot?), yellow plum tomatoes, red cherry tomatoes, strawberries, corn, peppers (paprika, two different kinds), sugarsnaps and lavender. 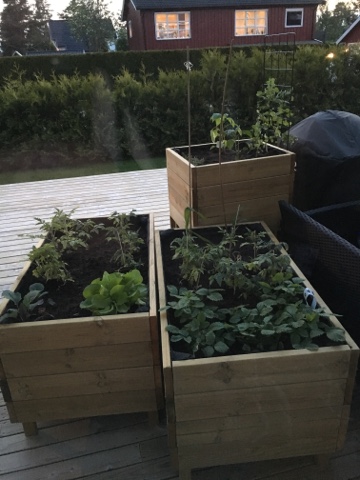 By our front door hangs a pot of stemorsblomster - which looked rather miserable when I bought them, but they've turned out quite nice. I think they like it there. 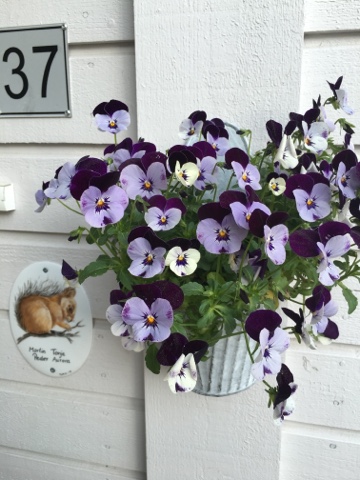 And in our kitchen there's still some experiments growing. My ginkoplant is in the transition from stick to plant with green leaves these days. There's another lavender in a pot, and some lemon thyme our neighbour gave us, and some coriander (trying to use it in our cooking, as it seems to be growing into something else..?). And then there's this one. Can you guess what it is? 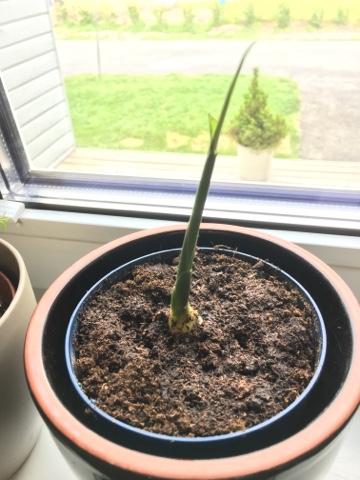 It's ginger. Yup, we had a piece of ginger root left over from one of the spring colds (lemon tea with ginger and honey is wonderful!) and instead of just leaving it to dry and ending up throwing it out, I planted it in a small pot with dirt, covered it with plastic and left it for forever (or so it seemed). I think it took about 3-4 weeks before we could see a small, green stem of something growing, and after moving it to a bigger pot, it really started to grow. Might plant it outside at some point - we're talking about making or buying another box for plants to have by the front door - mostly for herbs and such, but there's been things to do lately (like painting and life) so that point on our schedule hasn't been crossed out yet.

***
Hope you're having a good summer!