The most beautiful view in the world..

Hanging above my desk at work.

Here's to a new (short) week and easter! 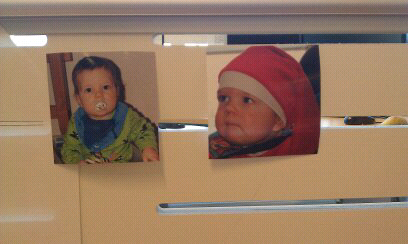 Getting ready for easter?

I think I might have killed an easter ball.. :/ A few weeks back I bought a new pattern pamplet from Dale of Norway, featuring new designs by the previously mentioned Arne & Carlos, and this weekend I started knitting one of the patterns (the basis is the same as for the Christmas balls/julekuler, but the design/pattern is more angled towards easter traditions). The one I started is the one in bright orange and white - and lets just say that (before steamtreatment - apparently this is the thing to do with knitted items - and filling) it looks nothing like a ball. Nothing. (I think I'll have to take pictures to illustrate this phenomenon..) Atleast I know where I did wrong.. I have a problem keeping the correct tension (or lack of such) when knitting with more than two needles. Perhaps it's the "I really don't want to lose any stitches"-fear that makes me pull the yarn too much, or what else it might be, but the smooth ball-shape in the pattern definetly lacks resemblence to my bulky, halfway egg-shaped thing. Yes, thing. Maybe I should give it a couple (or more) eyes and some teeth and call it the easter monster? Add a little matching hair or a tail?
*******
I've been doing very little sewing lately. In my mind, I've finished both this and that and made tons of something else - but reality shows little to no progress. It's still easier to pick up the knitting needles and watch a movie/some episodes/some general crap on TV than to go to in to the bedroom and sit down by the machine. Not to mention cutting fabric, finding a pattern - and ironing.. You need a page out of a pamplet or a book (or on the laptop), a couple of knitting needles and some yarn. Easily kept by the couch. Easily picked up during the day. Easily put away at night. Can someone invent a "think-and-sew"-machine for me, please?
1 comment: Koblinger til dette innlegget