It's 5:30AM and I can't sleep (for various reasons, little miss A has just been awake too) so what to do..?
Toss and turn in bed? Nah..
Try a reboot of the sleep circle? That might work.
So I got up, changed the thread on my needle and had a little "me-time" before going back to bed. 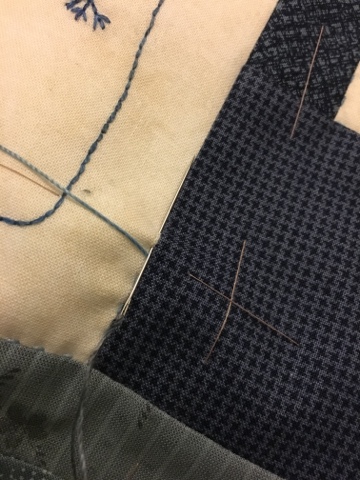 10-15 minutes of this, and my head should be relaxed again.
Therapy in the quiet hours..
1 comment: Koblinger til dette innlegget

A feeling of Christmas

Slightly late, one might say, but the feeling of Christmas is spreading a thick blanket over our little part of the world these days.

Not sure what I'm talking about? Well, let's see..  The picture below was taken here on Tårnåsen on December 20th - four short days before Christmas eve. Notice anything not quite Christmas'y?

Aaaah, you noticed the green background too, huh?

Well, fast-forward to last Tuesday and the park outside the castle in Oslo. In celebration of the King and Queen's 25th coronation anniversary, it was decided to give them some kind of winter park - which is why there's a snow canon blowing snow all over the place. I'm excited to see the end-results.

Although the pile of snow was growing steadily last week, there was still plenty of green (or brown..) around.

As last week drew near the end, soft, fluffy flakes of snow finally started falling. And this weekend it piled up! Hubby was outside showelling four times the other day (I guess it's true.. there's no point showelling while it's snowing..) and everything is covered in a soft blanket of white.

The temperature has been changing between being slightly cold and freezing! The last couple of days have seen us wrapping up in wool for a chilly 8-10 below zero - but from tomorrow and until the end of the week we'll be getting pretty frozen, with temperatures dropping to between 12 and 19 below zero. Ugh.. Thank goodness there are plenty of wooly clothes around!

A and I will be spending most of our days inside for the rest of the week. She's too little to be spending too much time outside when temperatures drop that far low.

I'm still knitting on my Christmas project, and the end is near! 40 of 42 points have been knitted, and if I get into some speed knitting, I might have it finished (and ready for a good wash) tonight! Yay! I've run out of yarn (d'oh..) but I've found some purple Holst Supersoft that is almost in the same shade of purple as already in the scarf, so I think I'm good. I already have my next project planned - which is something I've been wanting to start since sometime last fall - but it's a BIG one, so I'm having some stage-fright ideas at the moment.. (What if's are horrible at the moment...)

January 1st and all is quiet.
P, hubby and inlaws are outside playing football near the local school - A is sleeping (naptime) and I'm knitting on my Christmas project (remember the yarn I recieved in the Advent calendar?) while listening to a podcast (and house-/babysitting). 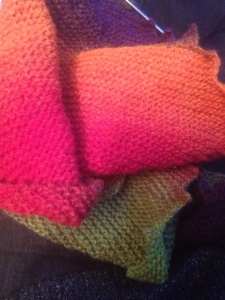 The house is quiet, outside it's quiet. Quite the contrast to last night's fireworks. I can hear the rain dripping from the roof. 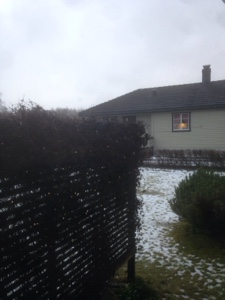 Not much snow left here - I think it's rained away back home too.. 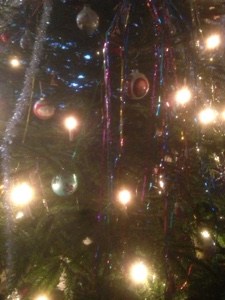 The Christmas tree - from the garden - is huge! Nicely decorated and glowing. It makes me miss our tree back home.
Everything's back to normal again on Monday - kindergarden for P, work for hubby. My last month on leave.. Work is waiting February 1st. (Not sure if I'm looking forward to that yet..)
2 comments: Koblinger til dette innlegget 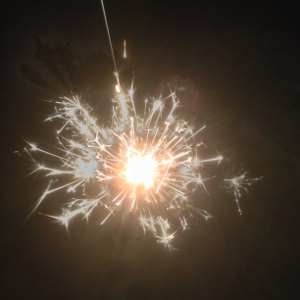 May the new year bring peace, joy, love and happiness to all. May it bring you tons of creativity - dreams and wishes. May your children sleep - so that you too can sleep. Find what you love - what makes you happy - and do that often. Crochet, knit, sew, write, paint, draw, play, read, bake, cook, travel.
Cheers!
No comments: Koblinger til dette innlegget