(I love this move!)
No comments:

This was my view when I turned away from the trash cans this morning. Not a bad start on a very nice, but a bit chilly day. (Too bad I spent most of it in an office.. And tomorrow they say it's gonna rain..) 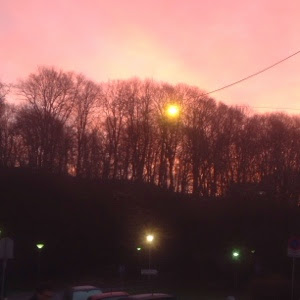 Friday to Saturday we had a child-free night. Hubby's parents were in town, and when Peder heard that they were leaving for the night, he asked if he could sleep where they were going to sleep (at hubby's aunt's place). I woke up early Saturday morning, and decided to get all my errands done before everybody came back, and had a nice, quiet stroll down to the subway by myself.

Not many cars or other people out, I think I met two or three others on my 10 minute walk to the subway station. 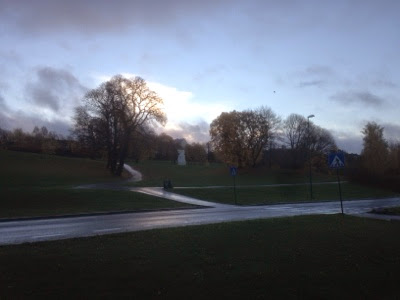 The sun rose over the park, and the blue skies were a welcoming sight after an almost full week of rain. 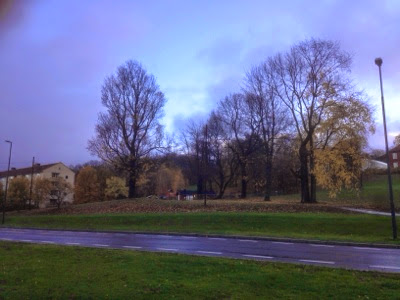 Most of the leaf has fallen off the trees, but some trees are holding on to their leaves a little longer. No longer green, but yellow orange-y brown against the green grass. 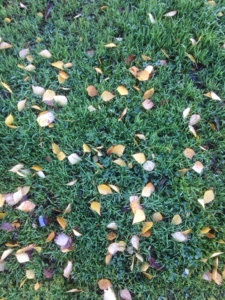 Some birch leaves on the grass near the botanical gardens. 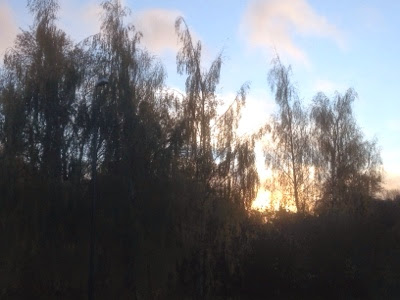 The sun seems to be burning like a roaming fire behind the birch trees. 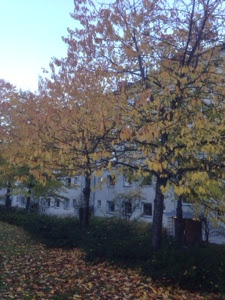 From golden yellow-green to orange-y brown, the leaves show their colors against the white building. 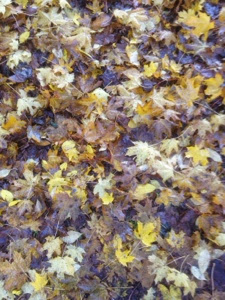 Completely covering the grass near one of the playgrounds.

I managed to complete my errands in a couple of hours and barely made it back home before hubby's parents came with Peder. There's been a bit of illness in our house lately - first hubby got a cold and then Peder - I ended up getting a sick leave for six days a couple of weeks ago, and now hubby's home sick (with sick leave). I hope we're getting all this crap done with now, and that the rest of the winter will be healthy and calm. (I think we need it - it will be busy enough when the new year comes, if we're not going to see more illness too!)

Oh, concerning SSCS-stuff? I'm almost done with the main parcel, the extras are fixed, and I'm thinking about the ornament. I feel the pressure coming, as the days seem to fly by in a whirlwind, but there's still a couple of weeks left until the deadline.

It's not often, but some times project just goes along so smooth that before you know it, you're handquilting a project you'd love to keep for yourself - but also enjoy making for your SSCS-"victim".
I just hope the receiver will like it as much as I do.. 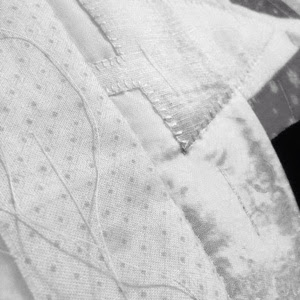 (Just a sneak preview.. It's not Christmas yet..)
2 comments:

The knitting continues..
Another ball of yarn, another range of colours. Multicoloured yarn is actually quite fun to knit with. 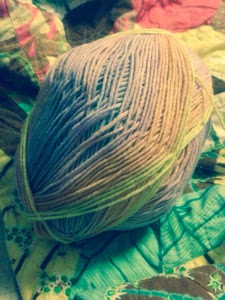 And playing with filters on my camera is also fun. 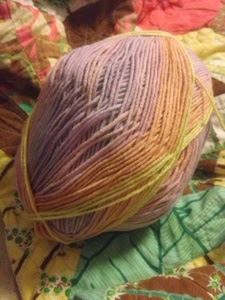 The actual colurs are a bit clearer, though, the second picture is without filter.
***
Have a nice evening!
No comments:

There's not many things that can beat a chilly feeling like being wrapped in a quilt while sewing down the binding. It helps too, that the batting is wool. :-) 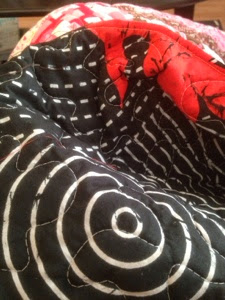 This has been my view for most of today.. 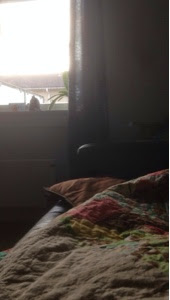 Ended up on sickleave for the rest of the week. Throat and ear infection.. Lots of naps to follow.
1 comment: 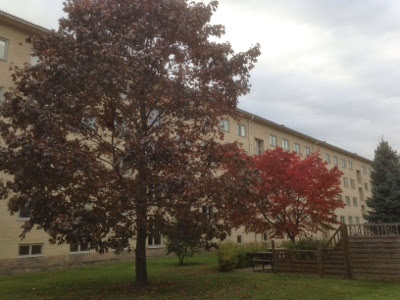 The other morning there was even frost on the cars parked in the street.
Anyone else humming the song from Frozen?
No comments: