It's the day before the day before the BIG day, and since we're leaving tomorrow to spend Christmas Eve with my family, we've done some cleaning, tidying and decorating today. Although we don't have alot of decorations to put up, we have about enough to put a little something everywhere around the apartment.

I also opened my SSCS-present today - and my camera managed to flash a little "out of battery"-message before dying on me - so when the batteries have been charged a little more, I'll show you some pictures of our Christmas-stuff. :) 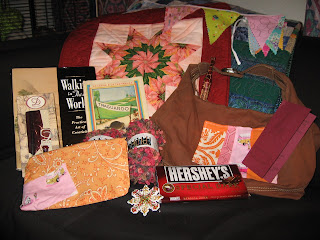 The past couple of week we've experienced some pretty cool weather - considering that this is Oslo, where it rarely snows and gets cold this time of year - but this morning the temperature crawled it's way up to -3 degrees celsius and it snowed about half an inch (this white blanket stayed white for about an hour before getting soggy and black.. yay for pollution and cars.. :( ). I'm glad we're going up to Trysil tomorrow - to clean, white, crispy Winter (with capitol W)! 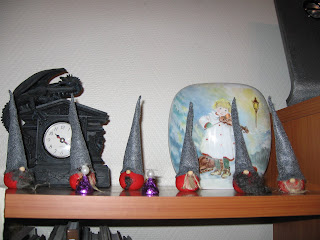 The vase in the back was painted by my grandmother - isn't it just gorgeous? I'd love to paint as good as her, but I guess I'll have to stick to sewing. :) The Santas are the same as in a previous post - only they've been mixed with a second batch we made (half of them are now wrapped in a present for BF's Norwegian grandmother). 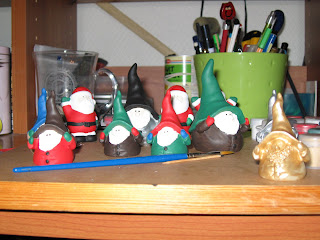 Home-decorated Santas - it's been fun to do some crafts together on the evenings. :) We'll have to repeat that for next year (maybe even for Easter?). :)

On the crafting front I've been working on the "The Night before Christmas"-pattern from Cinderberry Stitches, and I can happily announce that they're only missing the hanging-up-systems (but since we don't have anywhere to hang them just now, I'm leaving them for after Christmas) - besides that I've picked up the whole cloth quilt again tonight, and have been working on it for a couple of hours. It's actually looking quite good, and I think I can say for certain that 2008 will be the last year I'll have to work on it. :) *cheer* 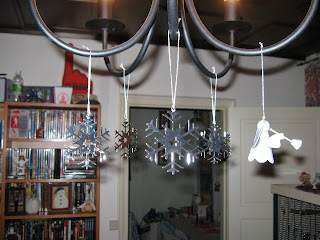 The snowflakes I bought in a store downtown early December - they look good hanging from the lamp - and since I only had four, I found a small angel amongst the decorations that matched pretty good. :)

On TV these days they're showing alot of Christmas movies - all of them making me a little sad and thinking of how good we actually have it, here in little Norway, comparing to many other places. We have a home, family, friends, jobs, a bed to sleep in, someone we love and care about, time to do things we want to, extra time to actually get bored every now and then, the resources to travel to far away places (according to my travel log on FaceBook I've visited over 40 major cities during my 26 years on this planet - and I haven't even included them all yet, this takes time!). There are so many placed I'd like to see, placed I'd like to go back to and things I'd like to do - like going back to Egypt (not just the touristy places but actually do some travel, see things and meet people). I greatly admire people who not just think about these things but actually do something about it, who give so much of themselves to others. I guess sometimes you'd think that you're just one person, a small percentage of the world's population, and that one person cannot do that much, cannot change the world - but I guess that every person, every step counts - no matter how great or small that step might be. It's still a step - and it's worth taking. That's why I want to make 2008 the year where I try to find ways of helping others, and do that - no matter how small they might be. I'll have to think about just what it is that I can do - but what time could be better then Christmas? 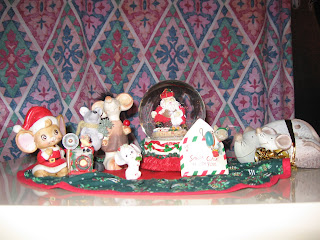 It's no secret I like rats - and mice, although rats are my favorite pets - and over the years rattie/mouse decorations have appeared here and there, and this year they're on the top of the cage, giving some Christmas spirit to the lazy little furry critters inside (really, they're quite lazy these days..). Speaking of the rats, I have to make them some new hammocks soon. If they're not chewed on - the washer's been eating on them too. But, I've got fabric and fleece, so just need to find the time.

And now, for some packing.

Hope you all have a wonderful Christmas Eve and Day - I'll be back on Wednesday! :D
*snowy hugs*
3 comments: Koblinger til dette innlegget

Well, my SSCS parcel has arrived anyway. :) Which makes it very close to a real Christmas. :)

Friday afternoon a note came with the mail saying there was a parcel at the post office for me. I picked it up on Saturday, brought it home, and have tried not to open it since then. And I will save it - for Saturday. BF is off on a Christmas party that evening, and since I'm spending the evening home alone, decorating for Christmas, annoying the life out of the other people in the building (who very much deserves it after the last few Thursday mornings *aaaargh* long story) by playing Christmas music extremely loud, I think I deserve to open the very exciting parcel from AfricanKelli.