Lately - OK, for quite some time now, I've been having less and less time, desire, inspiration, and, well, want to make stuff. It's not that I have been completely ignoring everything - I've been knitting a little, sewing a few stitches now and then, looking for patterns and bookmarking quite a few ideas that I'd like to try - but the whole I want to make something-feeling has just not been there. Closesly followed by the good, old I should've blogged, but.. that often comes hand in hand. I guess that's the reason for the lack of "proper" blogposts lately, and an increase of blogging photos from phone-posts.

I'm not going to promise to post so and so many posts a week, but perhaps I can sign up for a little more often than once a month?

Anyway, I've been knitting, and sewing - and actually have some finished stuff to show - once I get around to it. Until then, here are a few pictures from when our little family took an outing to the Oslo Reptilepark. (Yes, I'm the one holding the snake - and yes, it was very cool! ^.^)
﻿ ﻿

A wall of roses

Outside the courthouse in Oslo a wall of roses is rising again, as the trial after July 22nd continues.

Roses, cards, lillies, drawings, songs - and a beautiful stitchery are only a few of the things people have left there.

May 1st glowed with colours, a brilliant blue sky - and sunshine, long missed in the darkness that has passed. 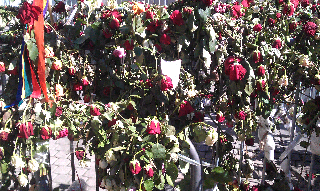