Today's the last day of August, and September is knocking on the door. The first month of fall is here, although I will admit that I've brought out candles and a blanket some time ago (mixing in the fact that I've struggled with a cold and the evenings have gotten both darker and cooler, lighting candles in the evening makes the whole world a little more snuggly).

It'll be a busy September, at least for me, starting on Wednesday. Two days workshop at work with one of the projects I'm working on means that I won't be able to attend the first guild meeting after the summer.. A little sad, yes, but seeing as I haven't finished anything yet, perhaps it gives me a second chance to get something finished.

Let's see, what's the next activity.. well, next week I have both a whole day workshop for another project, and I will travel to Trondheim (and back again) in one day for a meeting. I will be making a presentation for the bosses at my job (not something I'm looking forward to, but it needs to be done). And the week after that there's a two-day gathering in Lillestrøm (a city about 12 minutes away from Oslo, by train) where my colleagues and I will gather from all over the country to try to learn better ways to do our jobs. In between all that, there's my swimming class on Mondays, Peder's dance class on Thursdays, Martin's climbing at least once a week. *phew*


So, what else is up..? Well, I've been looking forward to a few events coming up later this year (and next year) but it seems that a few of those will have to go by unattended by me.

In a couple of weeks there's a quilt festival outside Oslo (more closely, at a hotel in Gardermoen, the airport). I've decided not to attend - first of all, it would've become ridiculously expensive to spend the weekend there and  attend courses. So I've decided to skip it, and miss out on meeting some of the many great designers in the quilting world. Oh well, there will be other chances.

The next event is a crafts and Christmas expo in Lillestrøm (12 minutes by train from Oslo, as previously mentioned). I'm planning to attend with my mom, at least for one day. There will be shops from all over the country and with relation to many, many different crafts there. We attended this one two years ago, and it was great fun! Last year I missed it, though, because the 50th anniversary of Doctor Who was in London that same weekend, and we had to make a choice (we'll probably not be around for the 100th anniversary, so the choice was basically quite simple). I'm really looking forward to the expo, both seeing new shops, getting new inspiration - and maybe even crossing off a few points on my Christmas present list. (Memo to self : get that list started, apparently it's only about 179 days left 'til Christmas!)

Earlier this year I missed the huge Norwegian Quilt Guild meeting in March, which was a little sad - but to be honest, I thought it was too far away. Every couple of years they've arranged the weekend in or close to Oslo, which has been great. Close to major airports, easy to travel to, and - for those of us living in Oslo or the area around - easy to take a day trip to visit. However, it seems that next year it might not be so close to Oslo as they first announced. I've heard something about it being moved to a new area - and when the announcement reads Oslo, I'd be quite disappointed if it turns out to be true (and the event is moved to some far-off location). False advertisement? Oh well, we'll see how it turns out. I think that the sign-up's will be included in the next magazine. But I have a feeling that there will be much thinking and planning involved, should I think about attending next year (and not just for me, there'll be other things and others to consider too - I might just forget about going in the first place).

Oh shoot, now I'm feeling a bit sad.. Guess I'll try to find something a bit more cheerful to think about - like planning the welcome to this world gifts I need to make to three new babies coming early next year. January/February babies need a bit of wool, right? I'll have a look at the patterns I have, perhaps small vests or hats will be suitable.

No comments: Koblinger til dette innlegget

Not a very productive summer..

I blame the heat.. it's been record warm in Norway this summer, with a steady 28-29++ degrees celsius all through June and July, and over into August. Which means that the mood for knitting is in the mind only.

And as goes for sewing? Well, my sewing machine got packed away in June due to our planned redecoration of the living room and hallway. We ended up giving away my sewing table (need the space for something else soon enough) and after the rooms were finished, my sewing machine is one of the last things not moved down from the attic yet.

I've gotten a little bit of hand sewing done, a few stitcheries and playing around with english paper piecing (EPP) but no finished there either.

Guess I've been a lousy crafter this summer..

But! We've travelled around parts of Norway this summer, going to zoo's and climbing parks (outdoor, up in the trees). It's been an active and action-filled summer for Peder - one which we hope he'll be able to remember.

A new project in the making. No pattern, just testing and playing. 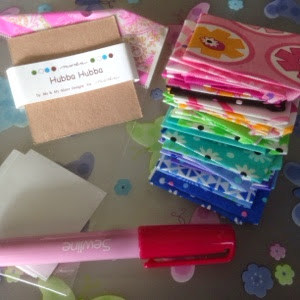 I've been a poor blogger this summer, but the last month has been active and busy. The three of us had three weeks vacation, and I have a ton of pictures to show and stories to tell - which I will share soon. With tropical temperatures here in Norway this summer, temperatures about 5-10 degrees higher than usual - there's been little crafty going on. Too hot!
I'll leave you with a picture for now, and get back to blogging about this summer a little later. 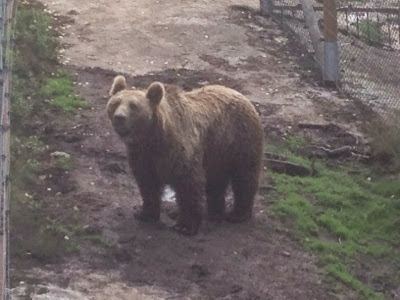 No comments: Koblinger til dette innlegget