Wow.. I guess time really has flown by lately (lately? try the last two months, that's more like it)..

I had a very good January, regarding finishing things anyway, but never got around to blog them.. So in the picture below you'll see three stitcheries from Tilda, one from Cinderberry Stitches, two (they are more or less identical) stitcheries with the wonderful message reading "Relax, Christmas will come" (I figured that these would be good for a pre-Christmas gift to some people I know later this year), and two stitceries copied from the 30's (I found the pattern in a quiltshop near Bemidji (Minnesota) a few years ago, and have planned to make something of them for ages, but never got around to it - until late last year. So that concludes the January finished objects. 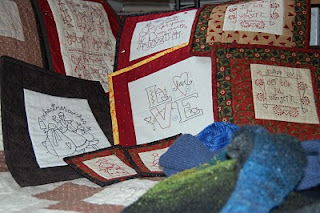 Trained eyes will notices some knitting in front, and yes, I have to admit that lately knitting has been the preferred activity. It's soo much less fuss to get around - you need knitting needles and yarn (and sometimes a pattern), which suits my mood at the moment. ;) In the back is a tiny baby hat I knitted (to test the yarn and the pattern). Not quite sure how I feel about it, but I guess I get to test the sizing soon. The medium blue in the middle is a scarf knitted in lovely soft alpacca yarn. And in front there's another scarf (same basic pattern, only the stitces are different) in multicoloured japanese yarn (silk and wool - a true luxury). For some reason I started to think about next Christmas, and seeing that I _might_ not have quite as much time (or energy) to prepare handmade gifts this year, I decided to have a UFO-marathon, finish things that's been around for ages, and just decide to put them in a gift pile. I still have a pile of "needing borders" or "needing backing" to do, and I am going to try to get these done too, while I still have time/energy. (I guess I should be really lucky for living in Norway - I have the time now, no stress, because I started my leave on Tuesday this week. Monday was my last day working - until November, if things go as planned. And I have absolutely no bad feelings for not exactly doing a ton of things in a day. If I get one thing done, maybe two, I'm satisfied.) 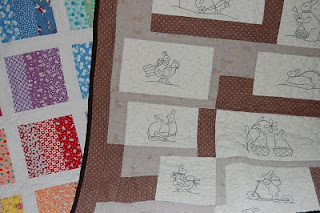 More finished objects - thanks to my mother for doing the quilting - are two quilts for the little one. I had a pack of 30's jelly stripes from Keepsake's (bought it about two years ago) and decided to make a simple throw-quilt with flannel backing, to use whenever we had a very early morning or "up in the middle of the night" event. The depressing part is that I have about half of the strips left.. which is quite annoying.. And then there's the bunny quilt. I started this some time in August/September last year, intending it to be the little one's crib quilt. It's a little big, but then again, the size means that it'll be usable for a significant time. I just LOVE the bunnies! 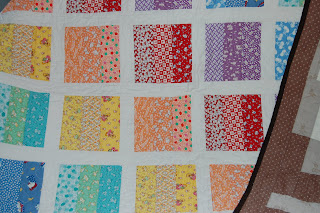 One of today's main events have been cleaning toys. I've used a cloth dipped in warm water and wiped off all the toys in the toybox. Some are bought by me and BF, some were given to the little one for Christmas, some inherited from cousin Emma - and some are actually from when my sister and I were small (which makes it really cool - I mean, who doesn't like finding things from their own childhood and use for their own children? All of these are currently on display on the top of our dryer. 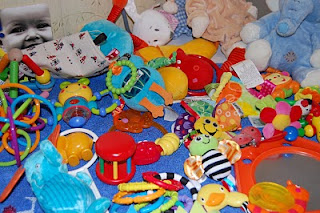 Another thing that I've been doing for the past couple of weeks, is landry. Several loads of laundry, in (well, to be honest) incredible small sizes. Just look at the feet on those pants! 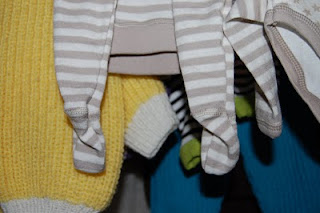 Or the size of these socks? (I actually used those socks when my parents brought me home from the hospital - and I have a feeling they're going to be used again soon.) 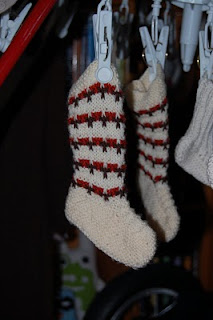 Spring is (finally) coming to Oslo these days - suddenly it's not that cold anymore, with temperatures reaching into the plus degrees celsius. Still quite alot of snow - and ice.. - but we're getting there. Finally! Now, if only the snow on the roof all over the city would melt away, so that we didn't have to strain our necks every time we go outside - it's pretty dangerous outside when you can risk getting a significant amount of snow and ice in your head just heading out to the store.. :S
8 comments: Koblinger til dette innlegget