Learing to blow bubbles (and milk, porrigde, pacifiers, and all other things we can possible put into our little mouth - and blow out again..)! *phreeeeewwwwwt* 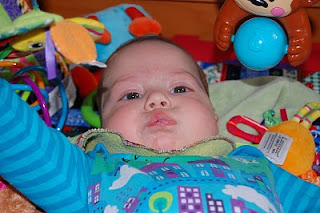 And we're counting down for ohsomanythings these days..

First off, Peder's mormor is coming to town on Wednesday - and we can hardly wait to spend a couple of days with her (and Emma). ^-^

Secondly, we're moving into a new apartment some time in the next few months. And it's all ours. Our very own apartment! (The papers were signed last Thursday, and now we're just waiting for our landlord to find someone to rent our current apartment - and then we'll pack everything up in boxes and move them to the new place.)

And last - but definetly not least, not by any means - it's once again time for the (now) wonderful tradition of Secret Santa Christmans Swap (SSCS2010)! Organized - once again - by the wonderful Donna - and we're just bubbling over with anticipation, secrets and planning for what's going to be my fourth - and Peder's first - year as a special someone's Secret Santa. 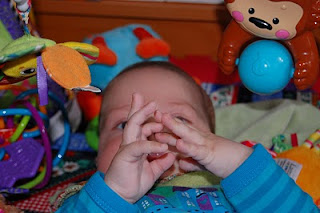 (Learning to count - a little early, but there's ohsomuch to count, be happy for - and look forward too, and it doesn't really matter if one cannot count very good _yet_ - we'll get there in time.)

But for now, I'm going to stop getting annoyd over the seemingly endless commercials running during this somewhat entertaining Ben Stiller-movie (although I really don't like any of his movies.. but seem to find this one rather funny) - and go to bed. Tomorrow is Monday, another day closer to Christmas - and we're off swimming in the afternoon. ^-^

(And for more crafty news, I'm working on Peder's Christmas stocking. There's no rush, I doubt he'll find it interesting for another year or two, but it helps to build the ohsoenjoyable Christmas'sey feeling I feel is flowing in from every nook and corner of the world (even if the shops haven't put their decorations up _yet_ - but give them a month or two and they will surely have them up).

Here there be monsters..

I love the saying that's written on old maps - here there be monsters. I guess that - instead of admitting that they didn't know what was in unexplored areas in the old days - they'd write that, believing that anything unknown or places that were new actually were inhabited by monsters.. like dragons, krakens, a giant octopussy, etc. I'd love to one day have one of these old maps - or a copy of one - on our wall.

Speaking of monsters, there's one in our house too. ;) Just look at these feet! 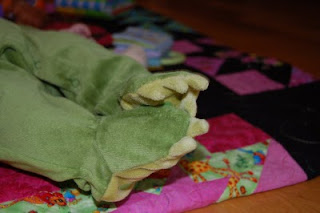 And toes with claws! 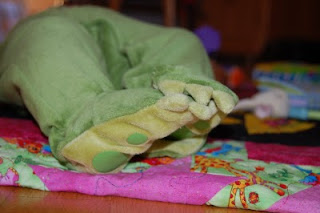 But don't worry, it's just Peder - playing in his dragon/dinosaur playsuit. :) 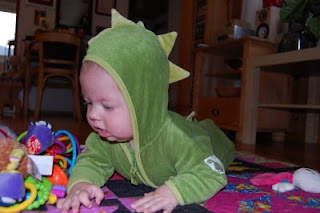 He's becoming such a big boy now, 4 months old, and just last week he learned how to roll from his back to his stomack (but not the other way - yet - so we have to move him back after a little while). :) He actually started doing this on his dad's birthday (4 months and 2 days old). 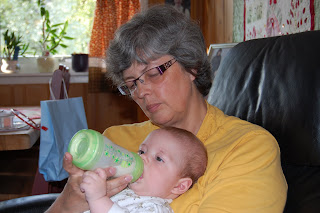 We spent a lovely week in Trysil with Peder's grandmother last week. Didn't get much done - like sewing - but we managed to squease in alot of social time (with many relatives, friends, etc) and as you can see, Peder really enjoyed spending time with his grandmother. :) 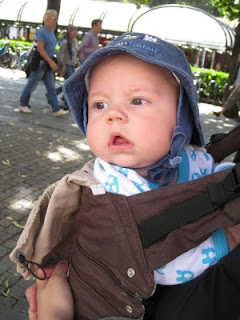 Most times when we take Peder out for a walk (him in his stroller) we actually end up like this - him in a harness on my tummy. He's way to curious, and doesn't like to be in a position where he cannot keep an eye on the world (or so it seems) - like lying down in his stroller.. that's really no fun at all!

On the more creative side, I've continued to work on Sublime Season (from Cinderberry Stitches). I've got 7 blocks done now, and am working on the last two. I've also managed to get some more work done on my Tailfeather BOM (also from Cinderberry Stitches). I can actually see a light in the tunnel for having this one completed one day - but I'm not going to say when that will be, with a little one in the house even blogging seems to be a less prioritised activity.. among so many others. But, and I know I've said this before, I'm going to try to blog a little more often. Perhaps kicking myself into atleast once a week? We'll see. ;)
5 comments: