Well, here they are - a few of the closer to 400 pictures we took during our 3 week trip to the States.

This is a picture taken while we were flying over Greenland - my oh my, that was COLD! We almost froze to death inside the plane.. but the view was beautiful. A little foggy picture, but, hey, I wasn't going to climb out of the plane to clean it's windows, so just bare with me on this one. 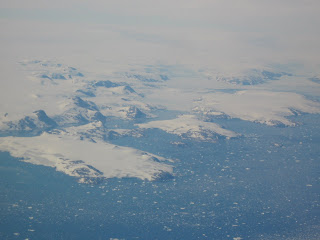 We managed to spend an evening at Medieval Times in Los Angeles - it was soooo fun! Two hours with show and food (not that I think any of us really realized what we were eating, the show was so exciting). I don't really like horses that much (find them quite scary actually) but from a distance, they were very pretty. :) We cheered for the knight in black and white, and I think our side of the arena managed to out-cheer most of the other knights' supporters pretty good. "We" won actually, but our noble knight was slayed by the traitor.. :( *sob* 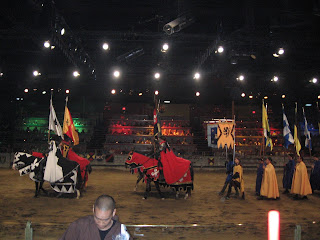 Ah, Las Vegas.. *smiles* So incredible fake but also a lot of fun and oo's and aa's. :) Tons of lights, thousands of people of all ages (although the picture you often see in the movies, of elderly ladies with buckets filled with quarters is kinda wrong.. most machines only takes bills these days, and they pay out in small tickets instead of cash - you have to exchange your ticket in a machine in order to get cash). This is from outside the Bellagio - I guess you've seen this marvellous fountain before, if you've seen movies like "Ocean's Eleven" with Brad Pitt and George Clooney. A very pretty sight, I must say, the fountain that is. ;) 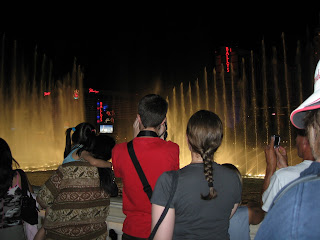 Did you know, that behind - or inside - the Mirage, there is a small zoo? ;) Yup, there is. With tigers and lions - and this little sleepy fellow. Some of them are late Sigfried and Roy-employees, but now they get to lay in the shade and rest most of the day. Very cool to be like 2 meters from this fellow - not that it looks like he cared much. ;) 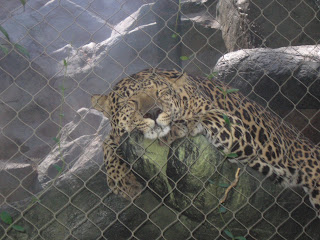 I got a new camera earlier this week - a Nikon D40. It's a mirror reflex camera (?) - not quite what I had in mind, but it was either that or some pocket-size camera (which I already had), and I kinda wanted a "real" camera.

This is a picture of Igor - I think she's telling me off for disturbing her mischiefs. ;) My very first rat-tongue-picture! (Kinda inside-info, I guess, my rat-owning friends know what I'm talking about.) ;) 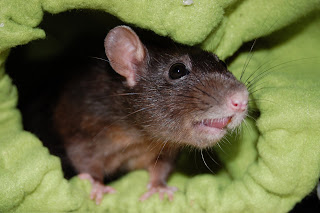 We had to go to IKEA last weekend. Our DVD-shelves were getting overfilled, plus there was this workbench-idea of ours.. Well, this is what the shelves look like now - we bought two of the skinny-looking ones in the middle, those are really for CDs, but if you adjust the shelves, they fit quite well for DVDs too. 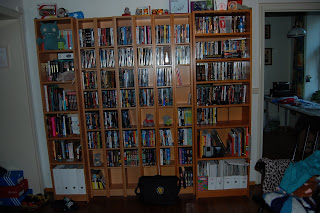 Ah, yes, the workbench. Well, here it is. :) We're missing the pieces with the drawers, but they didn't have them in at the time (it really bugs me when that happens...), so there will be some more things added to the bench some time later (about 2-3 weeks from now I think). But it looks good, and it's a nice place to sit and work on stuff. 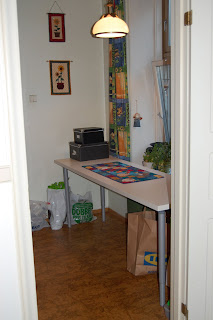 I (or we, since we both bought one) managed to find a new work-bag whilst in L.A. We visited Skeletons in the Closet, a giftshop located in the coroner's office. A very cool place, and run by a very very nice lady. :) There was supposed to be one in Las Vegas too, but we didn't find it and were too tired to make the biggest efford I think.. maybe next time. But the bag is cool - big and nice. Those who know me, knows how much I like the CSI-series (preferably the Las Vegas-series, but Miami isn't all that bad either). 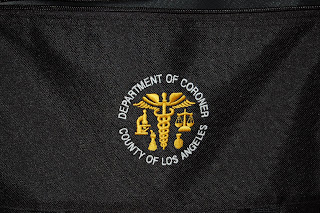 Ah, well, this is Igor again. I guess she's trying to tell me that enough is enough - for this time. ;) 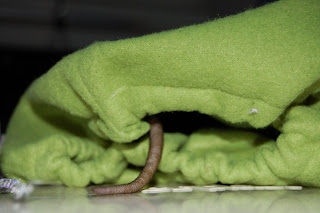 No, not really, but I'm kinda lazy at the moment (long days at work, little energy for things not related to archiving and trying to stay awake for as long as I have to - new job-related issues, I guess) and since I'm lazy - and just finished clearing out quite a bit from the kitchen (or the place where we work on projects most of the time - me cutting, ironing and sewing and BF drawing, glue-ing and other things) I'm not quite feeling like dragging all my sewing stuff out from wherever they may be at the moment, mess up the kitchen table - only to have it cleaned up and tidy again in a couple of days.. Inspiration is not exactly the issue either, I've got tons of ideas and stuff I want to do/make, just take a look at some of the patterns I brought with me from the US, it's just that BF and I have decided to exchange our kitchen dining table (our.. like in "the houseowner put it there before we moved in and said we could use it") for a work bench. more practical - or atleast we imagine it will be.

Careful planning has been put into this, and on Saturday we're off to IKEA to buy everything we need - and my parents are going to meet us there and help us move the goods back to our apartment. The only not-so-good thing about this work bench is that it is white.. but I think we can either paint it or find/make something big enough to cover it. *hmm*

Sorry about not writing about our vacation yet, but I'm not really feeling like going through it all again so soon. Not in a bad way, but the trip was long, eventful and kinda energy consuming, so right now it's just very nice to just relax and be "at home". But, sooner or later it will come - anyways, you've all seen the goodies I bought, and that was, quite frankly, what you were interested in, right? ;p Come to think about it.. we need to sort our pictures - which ones to print out and which ones to toss..
No comments:

I decided to take pictures of my moments of insanity in quilting shops according to the shops we visited. *phew* And I think I got it right. ;)

First place I managed to stop, was at Jo Anne's in LA (they were moving to another place, I think, so everything, at the time we were there, were off 20% and would've been more had we come the next week). A nice little collection of fabrics and tools, don't you think? 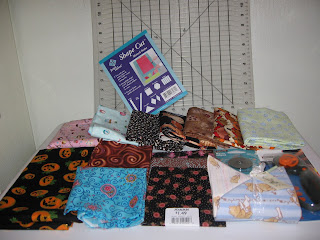 The next stop I managed to make, was in Bemidji - waiting for the brothers to get out from the cinema (our movie ended an hour before their) ended up in a short stop by Wal-Mart. The last time I was there - four years ago - they had a huge pile of fabrics and supplies, too bad this year it was almost nothing.. :/ But managed to find some cute charms and finally some pins. :) 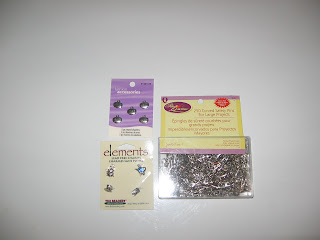 Last Monday, BF's mother and father (the father being the driver) and I took a round-trip to some "known only by word of others"-quilt stores in the Bemidji-area. The first stop was at the very cozy and small Willow Wood Market (a little hard to find when you're not familiar in the southern parts of the Bemidji-area - we stayed at Grandma's farm up north, closer to Blackduck) but really worth the trip. :) She made a lot of combinations using both cotton fabrics and wool felt. I bought a kit to make a tablerunner, and can't wait to try it. 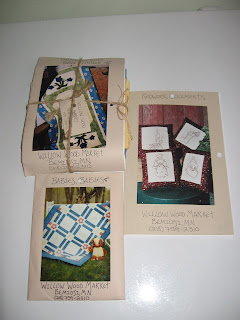 The next stop was at another "known only by the words of other"-store called Emily's Country Cottage - and I must say I loved it! An entire town house, with attic and basement, lots of small rooms and corners crammed with fabrics, patterns, gifts, cookie cutters, candles, buttons, and and and.. you just have to see it for yourselves. ;) 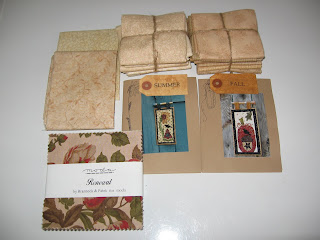 Another stop by Jo Anne's - this time in the Paul Bunjan-mall or Bemidji Mall, I really don't remember what it was called, everybody just called it "the mall". A small package of 5 FQ with vintage japanese kimonoprint (or that's what it looks like to me, and is what I inted to make from them) had to come along, with some yellow. The green and the red FQ are chinese - aren't they pretty? ;) BF really likes the green one. 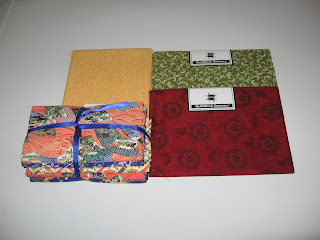 I had to go back to the Emily's Country Cottage-house when I saw that BF's mother had managed to find a FQ of a fabric I bought 30cm/14inches of a couple of years ago while living in Tønsberg. I loved that fabric, and could never understand why I didn't by more of it. Well, now I have a yard, and the name of the creator, the fabric no and everything needed to find it again. ;) 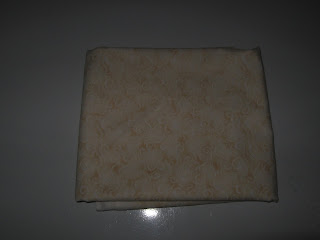 Emily's Country Cottage actually had two stores in Bemidji - the big house and a little cozy shop near the mall. Well, of course I had to stop by both. *giggles* 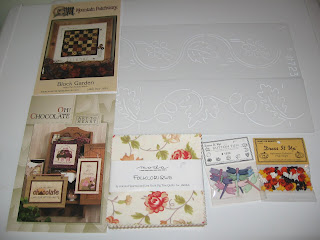 And look what waited for me in the mail when I came home!!!
On the left is the first package in the stitchery club hosted by Jordbærstedet (I think it's full.. sorry..) with a preprinted pattern, four FQs and four silken threads to match. I've just started working on it.. not quite sure what it will become yet..
Also, my pincushion from Anja had arrived! Isn't it gorgeous? Shaped like a suitcase, and it even has a small rat on the back. :D
And I got a package from Helen over at Honey Bunch Quilting, a couple of NZ fabrics and a cute quiltcard. If you ever need another box of pins, let me know. ;) 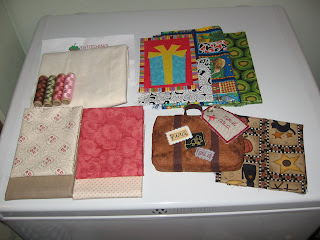 And I even managed to get some new books. ;) The two on the top are the same as shown in Jacobs Quilt. 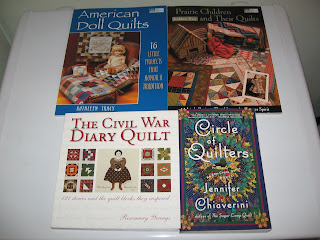 On the bottom are two of the books I bought in the US; a book about the civil war and quilters, and a second book about the Elm Creek Quilters (I've just been over at Amazon.com and ordered three more books in this series - hooked?).

In addition to all of this, we've come home with more books, a CD, a bunch of movies, clothes and funny t-shirts. :) But I think this was what most of you would be interested in seeing, am I right? ;)
3 comments:

Thee planes, four airports, 11 hours and some bad airplane-food later (not to mention _no_ sleep on the flight over, much thanks to the kid next to me who kicked in his sleep - while sitting on his sleeping mother's lap - and the fact that we were sitting as far back as possible on the longest part of the journey, right next to the bathroom - thank you plenty, all you middle-of-the-night-bathroomusers who taps their hands on and shakes the seats while they're waiting to go in..). But, other then that, and some not really so much fun experiences here and there, we've had a great vacation. Now to overcome jetlag until tomorrow morning, when I'm returning to work (I wish I had another week to sleep... I keep falling asleep today - I think about taking pictures of things we've bought or packages I've received in the mail, and then I fall asleep..).

No worries, though, a bigger and better update - with pictures - will come soon. Okay, May Britt? ;)

Mamma: you could always post some pictures of your presents. ;)

Vigdis: I'm glad you liked them - and you and mamma should really join us on a trip once. ;)
2 comments: