The lilacs are in bloom - and the smell is just divine..
I don't think I've ever seen so many lilacs in one city as I do here in Oslo - they are literally on every corner. And in almost every shade of purple (and sometimes white too). There are three different shades of purple lilacs blooming just ib our little nook of the city. 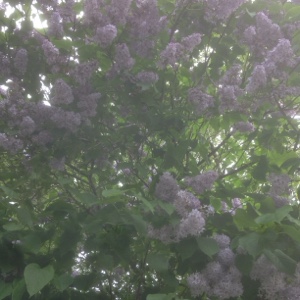 I'd like to have one of these in my garden too at some time. Perhaps we can plant one next spring? 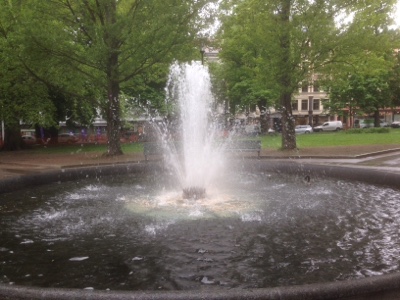 The fountains are filled with water - must mean that summer is around the corner. 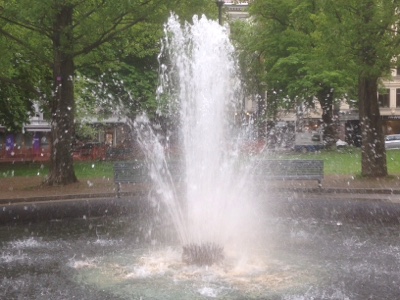 We're seeing some rain drizzling from above today, but it's not cold. We've just taken a short walk (mummy's need for coffee was bigger than A's desire to stay indoors, so she took a little nap while tiny drizzles of rain fell on her nose..) and will be getting some stuff done indoors for the rest od the day. (There are no magic closets here, so someone's gotta do some laundry today..)
Enjoy your day!
No comments:

Well, I did say in my previous post that I would write about the social event my sister and I went to last week, and here it comes.

Last Wednesday we went to Ringen Kino (a cinema here in Oslo) to attend an event hosted by Aftenposten (one of the largest newspapers here in Norway) called Norges største barselstreff (Norways biggest event for people on leave, like maternity leave, from newborn to about one or two years).

It is basically a day (well, a few hours) where mothers (and fathers, there have been a few dads there too) can get some information about different topics, do something different for a change and be a bit social.

Last week there were a few stands introducing their products (Nøstebarn, Nestlé and Neutral) and representatives from both Nøstebarn and Neutral spoke about their products (Nøstebarn about children and babies and wool clothes - and Neutral about allergies and their products being very good for sensitive skin). There was also a standup comedian who entertained - and a representative from the cinema telling about babykino (where the lights are only dimmed, the sound is little bit lowered - and people can bring their babies) and which movies are coming in the near future.

I've really enjoyed the two events I've attended - and not just because they have a goodie bag (but who doesn't like a goodie bag?). It's the whole doing something different, learning something, meeting new people (and babies) that really makes these kinds of events attractive to me. (It's like the baby focused version of a quilt show - you go to learn something new, look at the exhibitions and the products the shops have, to meet new and old friends (and sometimes there's even a goodie bag too!).

This time the goodie bag included :
- two magazines from Aftenposten called Oppvekst and A-magasinet
- a book from Litor/Egmont (Baby-bok - the book for the smallest)
- samples of baby shampoo and bath & wash gel and a huge pack of wet wipes from Neutral
- a catalogue, information about washing wool products, a promotional coupon and a baby hat from Nøstebarn (and a very handy drawstring bag which these things were stored)
- some samples of babyfood from Nestlé (in my bag there were three squeese bags of banana yoghurt and one mango-banana yoghurt for babies from 6 months and up, and a sample of porridge with apples and prunes for babies from 6-18 months - all of these will be stored until A is old enough to try them - she's already three months old this Monday!)
- a bottle of Møller's tran (cod fish oil - omega 3, supposedly very healthy for babies and grown-ups, but..)
- a sample of Vivage wet wipes (for intimate areas..)
- a pack of hand & face wipes from Libero (which is very handy when out and about with babies/kids who attract dirt and mess - which mine do.. well, not A yet but her brother is pretty good at attracting these things, like a magnetic effect!)

Last time MAM were there too, and a few representatives from Skôda talked about safety in cars, and there was a lady speaking about routines around sleeping (how to build good routines so that both babies and parents get a good night's sleep).

I don't know when the next event is going to be, but if we still live in the area I'm definitely thinking about attending. My sister, however, might not. Not because she doesn't find the subjects interesting, but more because little F is not interested in hanging around listening to some strange people - but is generally more interested in exploring, climbing the stairs and getting the heck out of there! Strange to think that A most likely will be all over the place in a few months time.. P started crawling when he was 7 months old.. that's like four months older than A is now. I wonder if she'll be mobile by the time she's baptised (which will be right before her 7 month-day).

***
Hubby is currently on the plane to Spain (Barcelona) and both the kids are sleeping (touch wood!). I'm enjoying a little much needed me-time before bedtime. The events from the past couple of weeks are still effecting me, making me feel tired and exhausted (ended up taking a two hour nap with A this afternoon) so I'm really looking forward to a more quiet time ahead. Not much travelling or big plans, not until our summer vacation in July. I should probably go to bed, but it is just so nice to sit here and enjoy quiet.. just for a few more minutes..

I don't think we've had such a busy and hectic and chaotic week in our lives since about five years ago. And, strangely enough, it can all be summed up in a few sentences. Like :

And now we're basically counting down for August to arrive, and we'll be moving into our new home.

Well, in this whole mess of a week (or eight days, to be precise) all of my sewing stuff has been packed away - even my knitting stuff is gone (except from the work in progress bag I received last SSCS and my current knitting project which is stored in there). I have no idea where my other knitting needles are - which is kinda bad, because I could use some of them in about 1.5 centimetres of knitting... nor where my scissors or sewing needles are.

I have sent a request to Chookyblue to ask for a timeout (or break, if you want to) from the SAL on Natures Journey. I don't see how I can possible manage to keep up on the SAL at the moment, and luckily I was able to get a little time to get back on my feet (or unpack from this madness, to be honest).

Tonight I am home alone - as hubby is out having a beer (or three) with an old friend of his. Alone might not be completely true. I am home alone with the kids. Luckily, P went to bed around 8, and A fell asleep somewhere around 9 (and I managed to sneak her into her own bed - yay!). I've had a couple of hours for my self (which is quite luxurious) and have done a bit of knitting, reading, blogging (haha) and copied all of the photos from my phone over to the hard drive of my mac (finally!).

Right now I feel tired. As in completely, exhaustingly tired. I can't wait for everything to get back to normal after these last few days. It might sound boring for some, but I kinda like to know what happens from day to day, and have more or less stable days. Too much stress and insecurity throws me off balance.

My sister and I went on a little social gathering today, I'll try to write about it some other day - right now I can hear my bed calling for me and it sounds very tempting!

Well, I didn't manage to finish all the blocks for April (but nearly!). April 30th I had all but two blocks done (and that without growing an extra arm - not bad, if I may say so). One more block was finished last night, will post that when the last one is completed too.
Finally getting some routines going here with baby A, so perhaps the blocks for May might be om schedule (and if not, I'm not getting very stressed about it - if I don't get whipped too hard, that is..).
Baby A is nine weeks old and growing like a weed (a very Norwegian thing to say?). Not too fond of the stroller (yet.. or if timed wrongly) but loving the Angelpack. 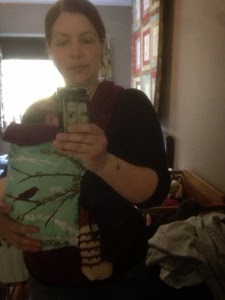 Yep, crappy photo, I know.. But it works, she sleeps like a baby (haha), hanging there when we're out and about.
***
Happy stitching!
3 comments: