Some progress, I guess.

There has been some progress these last weeks, even though the level of activity here on the blog has been rather.. hm.. unexcisting.

First of all, thank you all of you who were so kind and commented on the previous post (the one concerning May Britt's pin cushin tutorial. You are all too kind. *blush*

When it comes to my birthday (now almost a month ago already.. time flies..) I've been able to do quite some work on the gifts received from my grandparents. :) First it's the stitchery from Angels in Disguise: 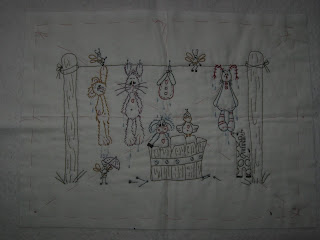 I'm basically done with it - just need to find some proper fabrics to use around it, and perhaps add some details (like beads or buttons, I like to add things like that). It was really fun to make, and I think the results came out good. :) 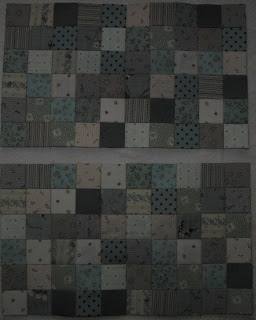 The box of fabrics have ended up somewhat like the picture abowe. 1" sqares sewn together (I think there are about.. *counting* 122 squares in these two pieces all together). I'm playing with the idea of making a bag, but not quite sure what to do.. needs some more time, I think. 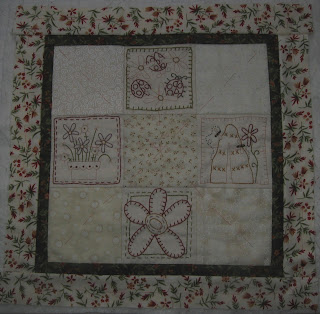 This picture shows what I am currently working on. Earlier this year I bought four patterns from Simple Stitchings (Hatched and Patched) but left them in my basket because I didn't quite know what to do with them. Well, last weekend I finally figured it out. I combined the four 3 1/2"*3 1/2" stitchery patterns with fabrics I originally thought of using for stitchery backgrounds into a 9-patch. And I used two fabrics (originally Christmas fabrics, bought at Katrine's some time last year) in light and green (same series and therefore same print) around the edges of the 9-patch. Now I'm almost done with the motifs, but not quite sure if this ends up a pillow case or a small wall quilt. Time will show.. 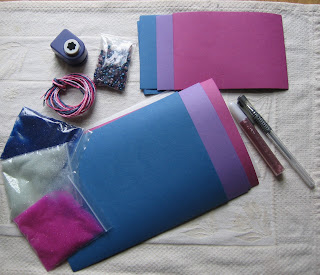 I also received a package in the mail earlier this week. It was from this new hobby club, which had called me, asking if I wanted to be a test member for a while. (I said yes, if there's any doubt.) And on Wednesday I received a box containing starting materials for making cards. The picture above shows some of the box's contents, and I'm anxious to find time and inspiration to experiment. :)

Finally, I found this, well, finished stitchery - which was only missing the "hanging up mechanism" on the back (I don't remember the proper word in English at the moment, but you get the idea, right?). :) As I turned it to look at the back, I noticed my signature, and, oh gosh, it was finished TWO years ago.. Oh well.. Had to do something about that. 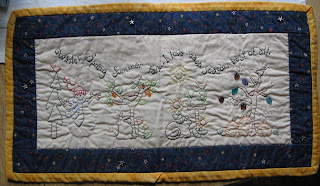 The original pattern (which I think belongs to my mother) said to use buttons, but I found these adorable glass beads and wanted to use them instead. There are atleast two stores here in Oslo which sells beads (in glass, metal and plastic) for making jewellery, and I try to visit them regularly to see if there's anything new. :) 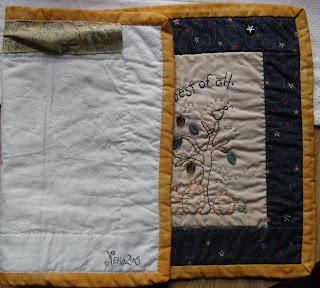 The last picture shows the back, the "hanging up mechanism" and my signature. Now I only need to find a wall in need of a friend.. hmm..

Oh, and by the way, our "family" has gotten bigger! A new baby rat had to come home with me last weekend, and now lives happily with the two other rascals in the cage in our living room. For the moment she's called either baby or Pétite (she's sooo small) but the name might change once we see who she really is (she's basically just sleeping or eating now, but when she gets bigger she'll be more active). My BF has a couple of cute pictures on his camera (he bought a new one) but I don't think he's moved them over to his computor yet..
2 comments: