I'm thinking about secrets these days. Snesking off to the sewing machine to get some secret test sewing and cutting and preparing done. 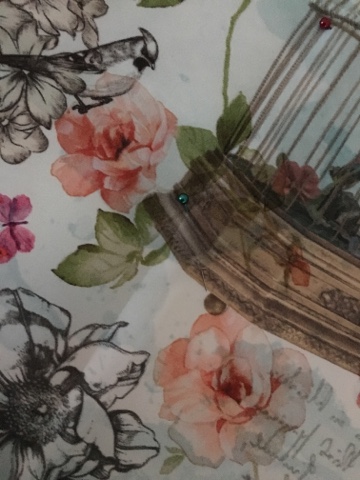 And I'm wondering, will the season of secret sneaking return this year too..?
1 comment:

Being there, being here - watching her cradle her bunnies, falling asleep. 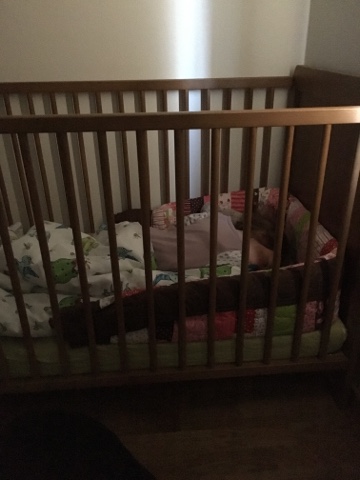 I miss every morning during the week due to going off to work so early in the wee hours of the day. Only so that I can come and pick them up and bring them home a little earlier in the afternoon.
In about 11 1/2 hours I'll be in the office, starting my week. It'll be a busy week - always is, following a vacation - meetings, a workshop that'll need finishing, probably a ton of emails to answer (and who knows what else).
But right now, it's just my little bunny girl, drifting off to sleep.
1 comment:

An update from our garden

Our garden project has been very productive in these past couple of weeks as we have been away from home (first visiting hubby's family, then mine). When we left, a single strawberry had started to turn red. Upon our return, we were able to pick two handfuls of small, sweet bliss of summer. And there's still plenty of green ones waiting! 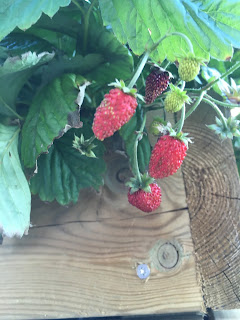 Even the tomatoes have been growing (like weeds)! These are red cherry tomatoes, planted next to the strawberries. Getting pretty good in size, just needs to change colour. (And if they don't, I guess I'll have to figure out something to make out of green tomatoes..) 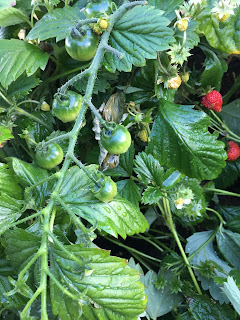 And then there's the yellow plum tomatoes. Also getting pretty good size-wise, but needing a little update with regards to the colour. 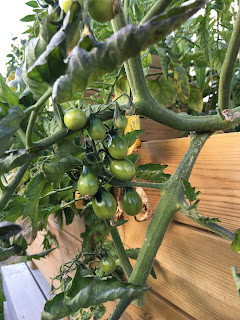 We planted corn, just as an experiment, and look! It's grown pretty good (and high). You can't tell by this picture, but I just found the humble beginning of an ear (ear of corn) yesterday, so I guess somethings going to happen here too. I have absolutely no experience with growing corn, so I don't know what to expect - or when anything is going to be finished.. 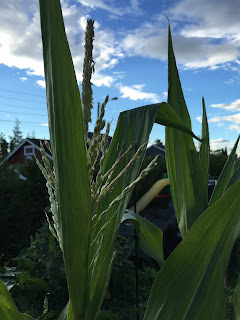 My ginger experiment has been thriving outside these past couple of weeks too. Just look at the root growing! It looks like it's coming a couple of more greens out of the one, little root I planted all those months ago (I think it took around 4-6 weeks after planting until something started to happen, and then they started to happen quickly!). 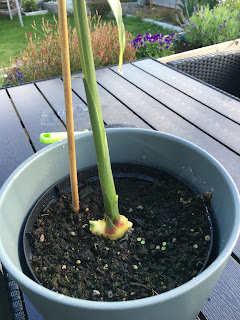 It's tall, and obviously thriving - and I'm very curious about the results. I'll have to google a bit to see when it might be ready for harvesting. 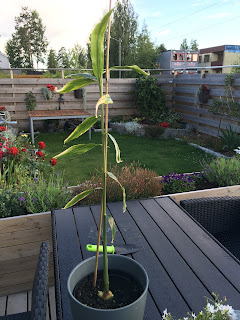 Our green salad was thriving for a long time, and I think we ate salad every day for about three weeks  - until the tomatoes in the same box ruined it. Hubby said it looked almost like the salad just disintegrated into mush, so maybe it didn't like being next to the huge, invading tomatoplants?

Out knotted cabbage was harvested a tad late, so parts of it was hard and woody. But the rest? Oh, so juicy! Will plant more next year. And check the harvest tips a bit earlier.. Harvest at the size of a tennisball versus at the size of a handball? Might make big differences!

Speaking of next year.. I think I (at least) have learned tons about gardening and planting this year. The top one definitely being things that look small and cute will grow into huge BEASTS of plants (!) so don!t plant too many things in the same box. This is very visible when looking in the third box, which I didn't get a picture of..

In that third box, the sugar snaps, the peppers and the lavender are having fights about which plant is allowed to grow - and where. The sugar snaps are throwing their climbers everywhere, strangling leafs and stems of pepper as they climb. While the poor peppers are blooming everywhere, trying to produce tiny, tiny baby peppers - which is hard, when someone's just trying their best at tying you up and pushing you down.. And the lavender? The lavender is just thinking something in the like of "I'm not taking any of this crap!" and growing into something that's starting to resemble a bush.. Which is cool, of course, thinking how we've grown it from tiny seeds in our kitchen window, how it ended up upside down on the floor once, in a window opening almost disaster..

Next year? Next year I'm trying to motivate hubby to build another box, and mentally replanting everything into tidy, neat boxes, filled with discipline. Like binding the tomatoes from the start, and not letting them grow around the bottom and over the edges of the boxes like wild amazon plantlike creatures. And removing sneaky leafs and plants, so that the tomatoes get their act together and produce tomatoes, and not one heck of a lot of leaves and stems! Also, three different vegs might be a bit too much for one box. I'm thinking one box for tomatoes, one for strawberries, one for others. Might also include another box on the other side of the house, dedicated to herbs and other goodies.

This is so much fun!