Now, who would've thought that?

April - August, it's been four months since I put these blocks away, knowing that I only had one block left to sew - not knowing when I'd be able to pick them up and complete them.

What with the house viewing, sale (yay!!!), summer vacation, packing and moving, time has flown by - and today I suddenly found a little shred of time to think maybe I'll have a look at that block now? And wouldn't you know, I was able to complete it! Found the fabric and the pattern while A took a little nap - and she was happily playing on her mat while I put the finished stitches in the star block.

Now April is completed - and I have run out of ready-prepared backgrounds for the rest of the blocks, so when I have another shred of me-time, I think I'll spend it preparing these. As Chookyblue once told me, one stitch here and there makes a completed block.


Little A will be six months old next week. A pretty happy little girl - when she gets her way. ;-) And if she doesn't, she'll be sure the whole world/neighbourhood/room/house knows exactly how she feels about that!

***
I truly enjoyed picking up the needle again. It's been a while - too long, perhaps? But my crafty surge has been filled with knitting and crochet. I have a crochet project I hope to get closer to finishing soon - and have started a new knitting project that I'm longing to see the finished result.

Tonight, however, I intend to celebrate my little (..big..) victory - knowing that I'm another (small) step towards a finished quilt!
2 comments:

The pro's of packing

During packing & moving, there is one small - yet big - pro that comes with being the one with the food boobs, and that is breaktime when A is hungry/thirsty/tired/sad/wants a cuddle.
If you ask her, nothing beats the boob (even if going for walks in her stroller also is increasingly fun, and daddy is acceptable as driver too)! 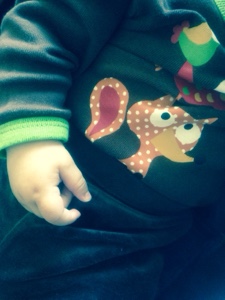 We are about 1/3 packed, P is off to visit his grandparents over the weekend - and things are going pretty good, except from some nasty surprices discovered late at night (they do seem to be working out, luckily for us).
2 comments:

A walk in Trysil

July has truly just swooshed by.. I'm not entirely sure where it went, but apparently some of it was spent on vacation. :-p

We spent a short week in Trysil, visiting my mom, and had quite the opposite of a summer than last year (where we almost melted away in the heat, and the kids spent their days - well, not the whole day, but quite chunky parts of it - naked, going in and out of the pool) with more gray and rain and cooler winds. But, every now and then, there were sunny days. Like this one in pictures below.

Another ting that happened during these days in Trysil, was that A finally "got it" - the stroller is not "the worst potential punishment or horrible place to be"! And she even fell asleep! (Quite shocking, really - we've spent her first 4.5 months carrying her in an Angelpack - ours is similar to the one with the cherry blossom panel.)


Luckily, this whole sleeping in the stroller thing doesn't seem to be a phase, and she stuck to it, on our travels in Sweden and Finland - and even now, back home. And as you can see from the picture above, on this day, there was sun!

The first picture shows the sign posted on the middle of the bridge (just for foot traffic, no cars allowed) showing the name of the bridge - Kirkebroen, the church bridge - and the year it was constructed.

This picture is of a patch of asphalt on the other side of the bridge. Ever since I was little, I've thought it reminded me of the map of Australia. Can you see it? Or is it just me?

This is the view from the town side of the bridge. The mountain is wearing it's summer dress, in shades of green.

On the other side of the little "bump" of trees lies my mom's house.

This is the church where my great-grandfather was a priest, and where both my sister and I and our children are baptised. This is also where A will be baptised later this fall.

The red building used to house the town's dentists - until they built a new office on the other side of the river. Now it's the culture school who keeps the offices in the red house, and children will come to learn how to play instruments and other things there.

This is my least-favorite piece of Trysil.. the stage near the river. Not because I don't like music - no, not at all - but whenever this has been used as a stage for concerts, the sound has thundered into the walls of our house on the other side of the river, making it shake and unbearable to stay in - and for some odd reason, the last band would enter the stage at 1AM.. Which is very much fun when you have small children who cannot sleep because the house is shaking. Not.

All the concerts I've attended here in Oslo have all ended before or on the spot 11PM. There are rules stating that, unless applied for, one cannot make noise and disturb people after 11PM. So they end the concerts and people go home (or off to bars and stuff). Apparently, those rules do not apply in the country. :-P (I may be wrong, but so far, my experiences have leaned towards that conclusion.) It might make me sound like a cow (cranky, old woman) but I like my nights quiet - so that the little sleep I do get, is good sleep. Cow nagging done (for today). :-)

***
Have a lovely evening, wherever you are.