With the birds out flying - Tailfeathers the quilt, that is - there was suddenly an open area above our couch.. It's a bit too early, I think, to hang my Winter Wonderland up on the wall - it's still just September, so I dug out another one, a little more fall'ish quilt.
Meet Annie' Calendar Quilt. 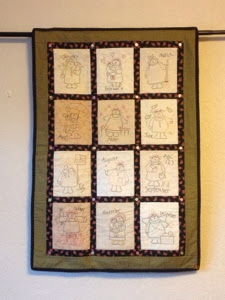 I made this a few years ago, as a BOM, together with my mom and a few others. Finding it again really reminds me of how fun it was to make, and I'm really pleased with the way it turned out.
It reminds me of another BOM'ish project I have in my drawers.. Unfinished, but with a plan.. Hmmm...
1 comment: 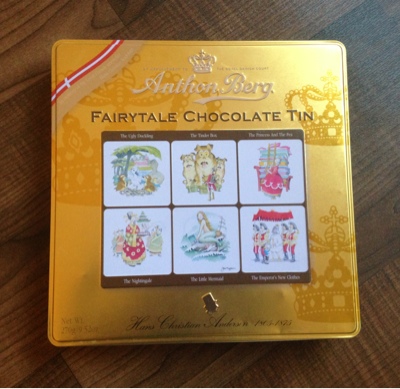 Now it contains one of my secret projects.. And no, you can't see.. not yet, anyway.. Patience.. ;)
***
Do you keep any of your projects in special tins or boxes? Do any of them have special histories?
No comments:

When the child sleeps..

The mother blogs, surfs the web and enjoys a glass of ice cold white wine (Riesling).. (Hubby, on the other hand, is busy working in his little office-corner of the living room..)

So, I promised in my last post that I had some news to share? Yes, well, while we were travelling (in southern France.. I'm starting to miss it already..) I got the news that I'd won a give-away! Would you believe it? In all my years of blogging, I think I've won one previous give-away.. so this was definitely a new experience for me.. What I won? Oh, you want to know that too? Hehe.. OK then.. The lovely Nancy posted about a pattern called U-Turn, which she was pattern-testing for the designer, Kristy. And in return, she was given a pdf copy of the pattern to give away. Which is what I was so lucky to win! :D I suggested that the pattern would be perfect to use all those mismatching, but oh so fun Halloween fabrics - and now I can't wait to start making my own U-Turn.. I just have to finish some secret stuff first..

Secrets, you say? Yes, secrets.. You see.. I'm joining again. You know.. the yearly fun elf'd by the lovely Chookyblue..? Co-elfed by the equally glorious Googy Girl? Of course.. it's the one happening of the year I cannot - will not - miss..

I've received the details of my recipient, and have started the traditional sneaking and planning - and I just can't wait (!!!) for December!

So. I'm off to do some serious sneaking.. and enjoying my glass of wine.. and watching Halv 8 hos mig (the swedish version of Come Dine With Me, which is what Hubby concluded with being the only reason why we have the swedish TV channel 4 available.. I think I have a secret crush on the commentator.. he's simply too fun not to listen to...).

I've got some news to share, and even a give-away I was lucky to win - but right now my laptop is a little busy.. Mini wanted to watch Little Charley Bear, so here we are.. He doesn't mind watching him with English audio. 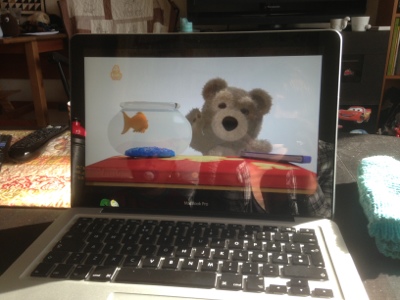 The past week has truly flown by. Filled with new things, new experiences, and loss of other things. I had my last day at the "old" office on the 23rd, said goodbye to many, many brilliant and friendly people (well, actually, I said until next time, seeing as I don't like to say goodbye).

My old boss and colleagues gave me gorgeous pink and green roses, but I ended up giving them away on the way home. We were leaving for a six day trip two days later, and I figured the flowers deserved to go to someone who could enjoy them more than I could the two days I would've gotten to keep them. I hope they brought you some smiles, Vigdis. ;)

We had decided to take a weeks vacation in the end of August, and seeing as I left my old job, it seemed like a good idea to have a week of relaxing between ending the old job and starting the new.


So, where did we spent this past week? Well, on Sunday we travelled down to Nice, France, to a tiny and perfect little one-room apartment (condo?) right smack in the middle of central Nice (it was less than 10 minutes walk to the old town, and not much further to the Promenade des Anglais (the English Promenade). We arrived quite late (for traveling with a three year old) so Sunday was just spent flying down and finding our hotel.

Monday we spent getting to know the area around the hotel. We took the tiny tourist train around the old town and up to the top of a small hill (where there are ruins of an old castle and a cathedral).

Tuesday we took the bus up to a small village in the mountains called Saint Paul de Vence. While we were walking around, we felt a few, small drops of rain fall, so we decided to find a place to eat. Lucky for us, we got seated at a restaurant with some kind of blinds over our heads, because about ten minutes later the sky opened up and the rain hit heavy on the poor tourists not yet under cover. We got to experience heavy rain, lightning and thunder - I think lightning struck not far from the village on at least one occasion. After a while, our "blinds" couldn't handle any more rain, and the nice people in the restaurant helped to find a table inside for us. We stayed there, enjoying a nice, late lunch, desserts and coffee while the elements finished raging outside.

Wednesday we spent finishing off looking in the old parts of town, getting some shopping done - and eating a nice dinner out. (Since we were traveling with Mini, there wasn't much romancing and wining & dining at night, seeing as he's usually off to bed around 7PM - but we had breakfast, lunch and dinner out every day.)

Thursday we had a lazy morning before a late breakfast/early lunch on our way to the train station. We took the train from Nice to a place called Biot (Gare Biot was the name of the train station we stopped at). About 200 meters from Gare Biot is a place called Marineland! We had agreed to meet my uncle and two cousins there, and ended up walking through a glass tunnel through a huge aquarium full of sharks and fish twice (!), saw parts of a sea lion show (but Mini got tired of watching them), saw the killer whale show (I love that show - I remember seeing it the last time I was there, which was like, maybe, 15-16 years ago), and eating a lot of ice cream, before saying goodbye to the guys and taking the train back to Nice.

Friday we flew back home to Oslo - and that's a whole long story, but I'm glad I'm not flying Norwegian Airlines anytime soon.. Anyway, it's nice to be home - and tomorrow our extra vacation is over. Mini will go back to kindergarden, and I will start my new job. (Well, more or less same job, but new company..)

Yesterday and today we've spent most of the time relaxing and getting things done - like tidying up in Mini's toys and books, going to the hairdressers, doing some much needed shopping for pants, and having an impulsive playdate with Systeryster and Niece.


Mini's gotten really good at drawing headswithlegs (hodefotinger) lately, and it's fun to have your portrait presented by him.

I've gotten some sewing done lately, and started some projects, but, I'm sorry they're kinda secret - at least for a while longer.. There are two competitions next spring which I'd like to enter, but I can't show you what I'm working on. You'll just have to trust me when I'm saying that I'm actually trying something I've never done before in both of these! (Yea, I'm surprised too..)

Oh, I've also decided to participate on a course too - in knitting! I know how to knit, but this is a new (for me..) stitch and technique, and I figured that for once, I'd like to take a course, and maybe I'll meet some new people too. It's not until the middle of October, but I'm really looking forward to it. It's run by Pickles - maybe I'll meet you there?

***
It's getting fall-ish outside, and I feel the urge to knit.. What are you working on these days? Are you sewing or knitting, or do you prefer to craft in another way?